“Lord You Said” – cards in Dutch 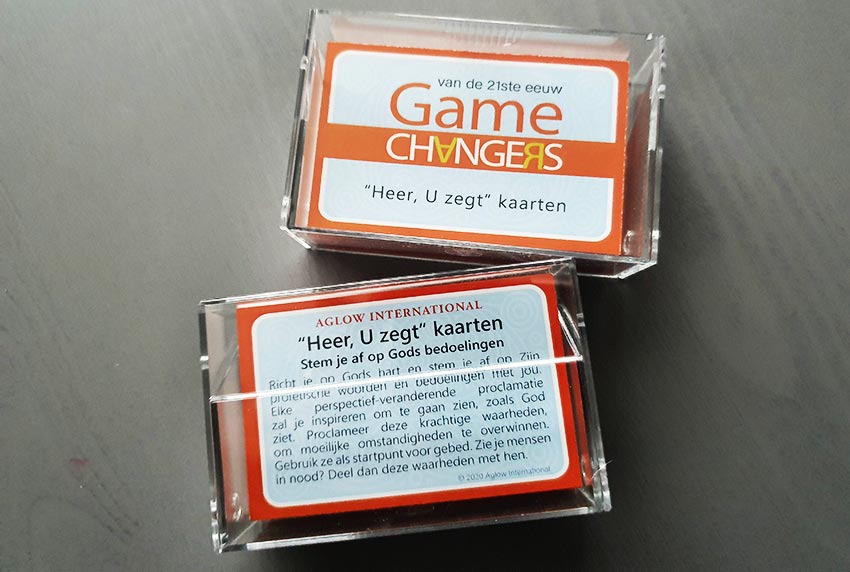 Every summer we come together as the national board to prepare the next season. It was between lockdowns that we could meet each other in person. It was a time of sharing about what God is doing in our lives in the middle of this COVID crisis and how we were shaped to be the apostolic leadership for our nation. We all felt that we wanted to comprehend much more about living in the Kingdom of God, to hear the strategies of the Lord in prayer and to represent that Kingdom to the people we meet in our everyday lives.

One of the board members told us that she bought the “Lord You said” cards and that she proclaimed everyday one of those words the Lord has been speaking to Aglow and how it encouraged her.

After making contact with Jervae Brooks, she put us in contact with Martha Stanley. Martha promised us that if we would provide the translation, she would make the cards in the same layout as the original ones and send them to us so we could let them print here in Belgium.

So, we started with the process of translating. We first translated every card very literally from English. But we soon found out that this was not good enough. Some lines weren’t comprehensible in Dutch. We asked different people to look at the translation and give their opinion, and that was a great help. But finally, we decided to come together as a board on a Zoom-meeting and go over every line together. Because we could discuss together what the words meant to us and how we could put that meaning in a sentence that was in correct Dutch but comprehensible for everyone who would read it.

As a team, we could grasp the true meaning of what God was saying to Aglow and translate it to our culture. It was so good to see that every member of the team had a piece of the puzzle and together we could make it whole.

Then we send the translation to Martha and within a day I had the first draft of the cards in my mailbox. After a few rounds of corrections, we got the final draft in a format that could go directly to the printer. And within a week the cards were printed.

Because the cards have the size of a business card, we choose a nice business card holder to put the cards in. In that way you can put the holder on your desk or cabinet, and pick every day a new card and put it in front so you can proclaim it repeatedly through the day.

May these cards be a tool to see the Kingdom of God grow in our nation!