A Lesson in Berry Picking 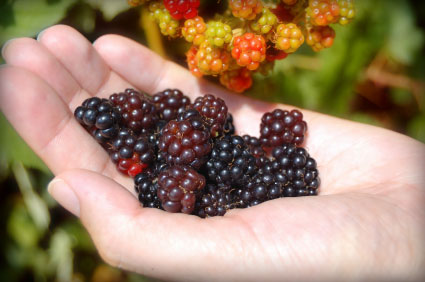 Tonight I went out to gather blackberries.

They had been calling me all week. Each evening after work I would say to myself, “Tomorrow I will go and gather the berries.” There were so many that I could see them from the road, just waiting for me to come.

As I began to pick, sometimes with both hands, the Lord began to speak to me. He was telling me that we are living in a day to gather the harvest. We see neighbors, we watch our families, and we say to ourselves, “Tomorrow I will tell them.”

As I filled my bowl, I found myself hurrying to gather as many berries as I could before the day ended.

As far as I could see, there were berries to be picked.  I felt the Lord was saying that the same is true in each town, city and village around the world. Barriers have been removed and the people are waiting, even crying out, to be gathered in. I heard Him say, “We must gather the harvest.”

I felt overwhelmed because I couldn’t reach many of the berries and I knew that they would never be gathered. I knew, too, that in the nations there were people that wouldn’t be reached and my heart grew heavy at the thought.

You see, that day I had just watched our International Field Director, Jervae Brooks, stand at the floor-to-ceiling world map in our Worldwide Headquarters and speak about our women in the different nations of the world.  I heard her tell how we send what funds we can to the leaders of those nations and I knew in my heart that what we send isn’t enough to gather the harvest. I heard her tell about the leaders in one country where the goal of the team was to have Aglow in every village.  What vision!  What courage!  What a dream!  And again, I wondered, how will they make it? I heard story after story.  I heard how women in one nation walked 80 miles to come to an Aglow meeting.

They are ripe for the harvest.

That was when I began to think of you.

All week I’d been working on change of information forms.  As I made the changes for leadership teams all across America, I peeked at your giving records. Many times I was proud of your faithfulness. Some of you give month after month after month, tithing on the monthly offerings, as Scripture bids all of us to do. Some send gifts from your heart, amounts that are over and above your tithe, in response to the needs that are sent out from headquarters.
I looked at individual records to see how we were doing personally as faithful women. I saw many giving $6 a month, some giving $12, others giving $25. Others – too many -- started out giving years ago, yet have not given in years.  It was sad to me, because now I know the difference even a small gift can make.

In the month that I have been privileged to work here, we have had questions come in to the Worldwide Headquarters. Some have asked, “Why do we need to send money to Washington? We give to our local lighthouse, isn’t that enough?” It is a simple question that deserves a simple answer:  What used to be enough is no longer enough. Just ask the berries if you don’t believe me.

Our women in many countries call and ask for someone to come, but we aren’t able to reach them in this day of harvest. U.S. Directors will need to go to that town far from them and they won’t be able to. Bible studies won’t be translated into enough languages.  I know, we can’t gather all the berries. But shouldn’t we be found at the end of the day, trying?

As I worked away at the berry patch in the light of the setting sun, I thought of what a difference $5 or $10 a month would make from 1,000 women in America who aren’t giving anything right now. I thought of those of us who could add an extra $10 or $20 a month to what we already send.  I thought of major donations that once came in on a regular basis and I wondered what we could do if they began to come in again.

Would it make a difference?  It would to the berries. And it would to women all over the world.

The Voice that Stifles

You see, I think we listen to a voice that comes to stifle our giving, telling us things like, “Your gift is so small, it wouldn’t matter” and “Why should you give to them? You already give to many good causes.”  Have you heard the one that tells you that your finances are too tight and you can’t afford to send anything, yet you never miss the latest sale at the mall?  I know that one.  As a woman, it speaks to me.

As I worked, I had an ongoing conversation with God: Me giving Him excuse after excuse for why I could never gather all the berries. Have you noticed that He ignores our excuses and keeps talking to us as though He doesn’t even hear them? I heard myself arguing, pleading with Him…..”Lord, I simply don’t have enough.” It was then I heard Him say, “What do you have in your hands?” I looked down and all I had was a bowl. I heard Him say, “If you will be faithful to use what you have and give what you have, then it will be enough.”

Enough?  Enough to gather the berries? Enough to reach the women of the world and their families?  Just the little that I have in my hands?  Then I remembered the widow who was making her last meal and I thought how many times I have felt like that.  I just didn’t have any more to give and yet the Lord was asking me, “What do you have in your hands?”  She gave just a portion of what she had and what happened to her?  In the day of famine, she never lacked.

I arrived at Aglow in the summer months, the months when people go on vacation. These are the months when we have to make calls to leaders to tell them that we don’t have even the small monthly funds they count on. Sorry that the berries are ripe. It is the time of year when the conference/special events office needs to hire extra help. But this year there are no funds, so Francine Chick, project coordinator, is doing extra work as quickly as she can.

By September, when Aglow conferences are held in other nations, Jane needs to be there to impart the ministry’s vision and mission to them. Otherwise, how will they know? We distribute what we have, but it isn’t enough.

Again, I thought of you, the women in the field, the women who know how to stretch a dime into a dollar. You are the women who know how to move this to do that. You are the faithful, the ones to whom God has us turn time after time after time when the need arises, because He knows that you will take a portion of what you have to keep His work going forth. He knows that you know the berries are ripe.  He causes the cries to come to you in the night.

You never doubt His asking. You just go to the place you keep your money and you get the portion that He says and you give it. And, in return, He causes that place of your provision to never run dry. The harvest comes in.

I just came from the field where I served as an area president. Now I look from a different place and I see the sacrifices that are made.  I see Jervae go and ask about funds and return to her desk, happy that she could get even a portion of what she asked for. Other times, I see her return empty handed, knowing she is going to have to make a call to a leader in a ripe berry patch and tell them, “Not today, maybe tomorrow.”

I think of all the years that I could have given more and I didn’t and I wonder which ripe berry dropped to the ground never to be gathered. How many times have I eaten what I should have sown? How many pairs of shoes do I need?

God gives seed to the sower. I believe that if each one of us would purpose in our hearts for the rest of the year to give up one thing, just one, and be faithful to send that to headquarters…well, we could reach more berries. All some of us might be able to do is give up small things… a soda, a bag of chips. Some of us can give up a pair of shoes, or skip a sale at the mall. Perhaps a hundred of us might skip a meal out or take our lunch to work. I can only imagine what a difference it would make.  I can only imagine.

My thoughts toward you are tender. My heart is heavy at where we find ourselves, but I also sense an excitement about where we could be by the end of the year.  You and I, working together, can make a difference.

What do you have in your hand?  If you will begin to send it, I will tell you the difference you are making.  Please, don’t let this moment pass.  Now is the time! We are the people and the harvest is ripe!  Let’s do it!