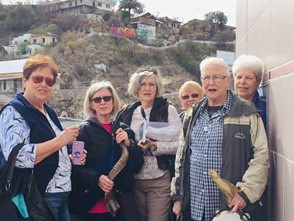 Aglow at the Nogales Border in ArizonaHis decree came following the report being given at the podium of Aglow’s trip into Viet Nam earlier that year. As he listened, what he was hearing in his spirit was, “It is a move of God that has moved women from prayer warriors to apostolic-prophetic watchmen.” He went on to say, “This is a major shift and it is an identity expression that we have not seen in the past.”

Today is a special day to sow into Aglow’s future as we continue to confront the enemy and propel the Kingdom forward in the nations of the world.

Following a recent prayer call to the US leaders concerning security issues being experienced at the southern border, teams in the states of Texas, California, New Mexico, and Arizona went to their respective borders speaking peace into the storm. MSNBC reports that the largest fentanyl seizure (254 pounds) ever recorded at any port of entry in the U.S. took place on Saturday, January 26. It was discovered “hidden inside an 18-wheeler carrying cucumbers, during a secondary inspection at the Mariposa port of entry.” An Aglow group stood earlier on that very border calling hidden things to be exposed.

Invest to ensure Apostolic-Prophetic Watchmen are ready to move in an instant. GIVE NOW

Israel: From the Back Row to Center Stage

When Aglow took 450 “tourists” to Israel in 2000, we had not yet recognized the significance of a trip that would birth a call to this tiny nation. The next year I was invited to an event in Florida about Israel. Not having had a stirring in my heart yet regarding Israel, my purpose in attending this event was to learn, to hear by the Spirit and to become engaged by the Spirit. I sat down in the last row of the meeting room, not wanting to draw any attention to myself. To my astonishment, I realized I was being called forward from the back row to the small platform in the front of the room.

With my heart pounding, the leadership of the gathering began to pray and prophesy over me regarding “my Esther call to Israel.” Oh my, I thought to myself. This is something I had never considered! Don Finto, James Goll, Tom Hess, and others anointed me (and Aglow), setting us on a course of discovery that has gained momentum over the years and continues to this day. Oh, how things have shifted in importance in 19 years. My heart has become fully engaged!

The number 19 represents FAITH. Our walk with Israel has been a walk of faith, listening and feeling after the Lord. “What are You saying? What are we to do?” He has been faithful to lead us year by year giving us further revelation.

Now 19 years later, we will gather September 9-11 for our Jerusalem Convocation. We were amazed at how quickly the convocation sold out with seats available in the overflow only.

Webcasting will open April 1st. We have already heard from some who are planning to gather groups to be part of the convocation through webcasting. I urge you to start planning to host a group now.

God has encouraged us to be light-footed as we move forward. My sense is that being light-footed means we will need to move immediately as He directs us and we may not even have time to call out for help! In order to do that, we must have the funds before we need them.

Stop now and ask the Lord, How can I be a part of making the way for the army of Aglow to have all we need to advance His Kingdom purposes in the earth? Will you be light-footed as you move quickly to obey what He is saying for you to do?

Invest now to keep Aglow light-footed as we advance His Kingdom globally. GIVE NOW