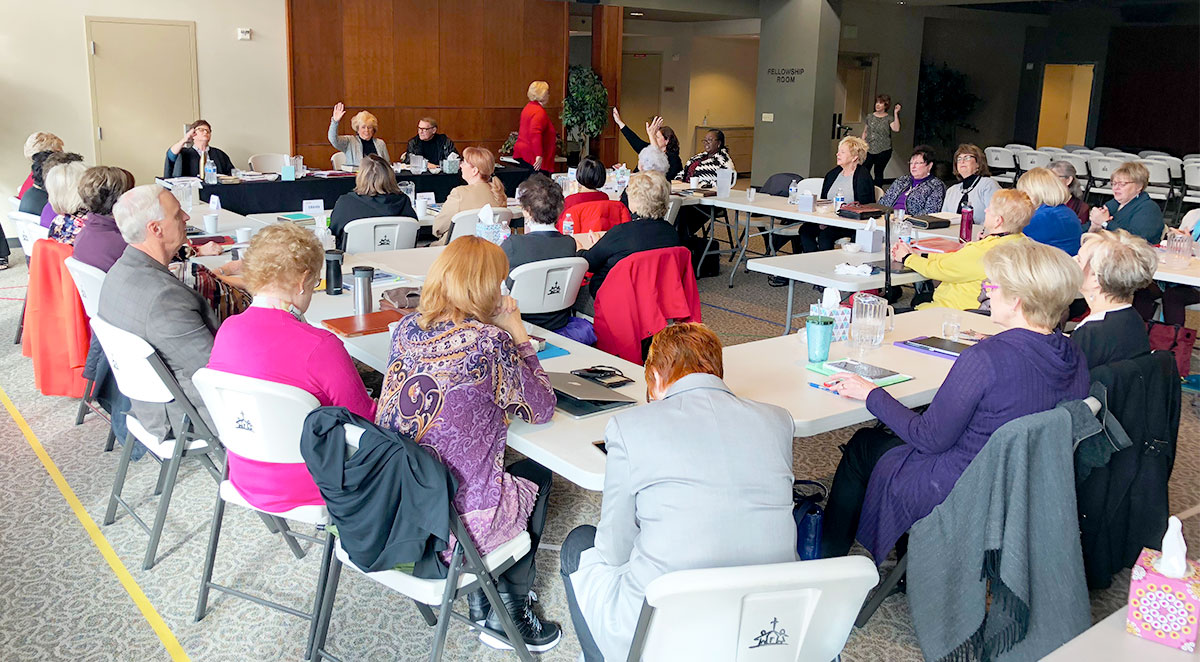 Warm greetings to you! I trust that you are enjoying the Presence of the Lord in increasing ways. It is His Presence that defines us and His Presence from which all our activities must flow.

After our conference in Richmond, and the confirming words spoken regarding Aglow, my heart felt stirred to bring together the leadership of all the “moving pieces” of the ministry to seek the Lord. I felt that we needed to pray together and confer with one another to see which pieces of our history will move forward with us into this new era. Therefore, I asked the leadership to gather in Seattle for a Roundtable Meeting.

On Sunday, March 4th, I met with the U.S. Leadership Team. It was a wonderful time of connection and sharing our hearts as we pressed close to hear what each one “took away” from our powerful conference in Richmond.

Here are a few of the comments:

The air was filled with His Presence as we spoke life-changing truths out into the atmosphere.

On Monday, the Headquarters Leadership Team, the United States Leadership Team, 4 of the U.S. State Leaders, and the International Board of Directors gathered off site. What a powerful group of committed leaders; leaders who have poured out their lives in so many ways through the years to walk in integrity and bring Heaven to earth.

In my opening remarks I referenced a word from a prophetic voice from the late 1950’s. That word partners with statements Asher Intrater of Revive Israel, made while in Poland earlier this year. He said that as 2017 ended, we entered a new age that returns us to the acts of the early church in Acts 1, 2, 14, and 15. Asher went on to say that, “The conditions of the book of Acts are aligning again as never before. The Ecclesia, believers around the world, and the apostolic remnant in Israel are aligning and this alignment will cause a speeding up of time in order to fulfill the Great Commission.”

In 2006, Mark Chironna, a guest on Benny Hinn’s television program, gave a word about “a company of people who have been hidden, but will come forth and speak as Moses did to Pharaoh, challenging the evil powers of that day. Benny Hinn quickly added that a sign of this company coming forth will be the death of Billy Graham.

As you know, Billy Graham died February 21, one day before Dutch Sheets hosted a meeting in Washington, DC at the Trump Hotel calling for a spiritual turnaround in America.

We recognize that the signs of end time are upon us. It is interesting to look back and see ways God has prepared us year by year as a ministry. In 2009, Mike Bickle spoke to us about the 10 virgins – and the fact that only five were prepared with sufficient oil in their lamps. I believe the teachings Graham has brought to Aglow since 2004 have caused us to be a prepared people who know who we are and Who God is for us.

I again recall the words spoken prophetically by two men in January of 2014: “Time is short” and “Prepare your people to meet the King.” Everything in my spirit stood at attention then and now!

A glorified Bride is emerging in the world. Conditions are ripe. For the first time since Bible days, there is a Messianic remnant in Jerusalem who is merging with the International Church to form a Bride fit for the King.

I want to ask you, are you prepared for the return of Jesus? Are you prepared to stand in the face of the evil that will come on the earth before He returns? Time is short. Be a virgin who has oil in your lamp.

I began closing my remarks that Monday with a few points from Chuck Pierce:

We must talk to our people - those we lead in the Lighthouses - at the grassroots level of Aglow - to become prepared.

I sensed the Lord indicating a process that is the pathway to and through the gates into victory.

As we closed that first day together it was clear that a single, overarching mandate was before us. It is a Kingdom call for Aglow, to propel the Kingdom forward, in all that we do.

The mandates as we have known them are going to their rightful place as foundational truths. They have been built into our DNA.

We know how men and women are to walk together in dominion as God defined it from Genesis. Men must rise as men in the earth and women must rise as women. Together we will expose evil systems that hold people groups in bondage. Together we will stand as Israel in the face of anti-Semitism and we will partner with the Messianic remnant in the Land. We are a house of prayer for all nations who has gained air supremacy and who knows how to decree in alignment with Heaven. And we have a heart to seek and save the lost in each community around the world.

Each of these truths are written into our DNA. It is who God has made us to be in the world.

An interesting change took place on Tuesday as we did not return to our off site venue. I sensed the Spirit indicating that we were to go the Headquarters of Aglow. So all 42 of us crowded into the meeting room at the Aglow office.

Coming back into “our own land” was profound. I realized it was profound because that is the place where an altar for the Lord had been established. A powerful time of worship and prayer ensued. We stepped into the place God has called us into - to be “preparers of the way of the Lord.” As a ministry born of the Spirit and led by the Spirit for 50 years, our anniversary was a time of re-commissioning and re-mantling. God was again deeming us ready for service as a ministry that has been programmed for optimal performance, as He directs.

God is serious about what He has built into us. We are equipped with air supremacy that will dismantle principalities and powers. We are a giant killing organization. We have been called to remove blinders off people groups so that they might be saved before Christ returns.

Yes, time is short. As Asher stated while in Poland, “It is time to warn people of the things that are to come.” God’s heart is that none should perish. Aglow, you have been called for such a time as this.

Thank you for remaining faithful in all God has given us to do locally, nationally, and globally. Aglow men and women are making a profound difference in the nations of the world. We have been equipped and positioned to propel His Kingdom forward!