Behold, I Will Do a New Thing 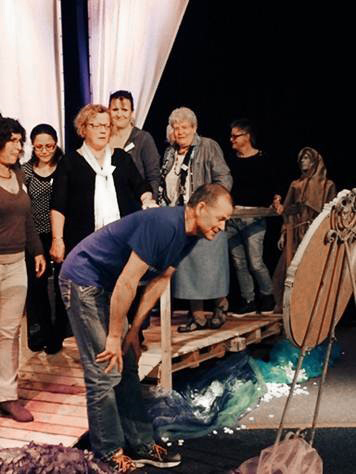 “Powerful, refreshing and renewing were the keywords of the recent Aglow Conference in the Netherlands,” writes Phia Kamp, Aglow Netherlands National President. “The theme ‘Behold, I will do a new thing’ was manifest in the breakthroughs God gave during this conference.”

The platform was decorated with a mannequin dressed in burlap and chains on one side of a bridge, and on the other side was a mannequin draped beautifully in purple and gold with a crown on her head.  Near her was a large mirror with the theme scripture written on it.  At the end of the conference, each attendee had the opportunity to walk over the bridge “out of the old into the new”.

Diane Fink, Aglow Institute of Ministry Director, spoke about the power of the prophetic word and how we should move in the new things God is revealing to us.

Phia continues, “Prophetic words really touched the men who were present at the conference. God spoke to the men that they should stand up and take their place in Aglow. This was a heavenly moment arranged by the Lord. God started a new thing in the hearts of the men when they stood up and moved in authority. This is a breakthrough in the Netherlands, and in the heavenly places.  The breakthrough was evident in the prayer session the next day when the men prayed powerfully.”

“God gave another breakthrough to young people. On Saturday there was a special workshop for the Generations attendees where young people gathered and shared from their heart. Young people were connected, and will stay in touch with each other to be involved in God’s Kingdom.”

“It is amazing to see how God is working, and how He is making new things. We saw that in a special way in the life of a woman named Bridgit, when she gave a concert and a strong testimony. God brought her from deep darkness into the light.  Bridgit’s life is an illustration of the hope only God can give. God challenged her to make a CD of the beautiful songs she had written during the Dutch Aglow conference in March of 2013. She went on this adventure, and just before this year’s conference the CD was completed.”

“Jesus was the center of this conference, and in the Netherlands we will go on moving on the path God has prepared!”