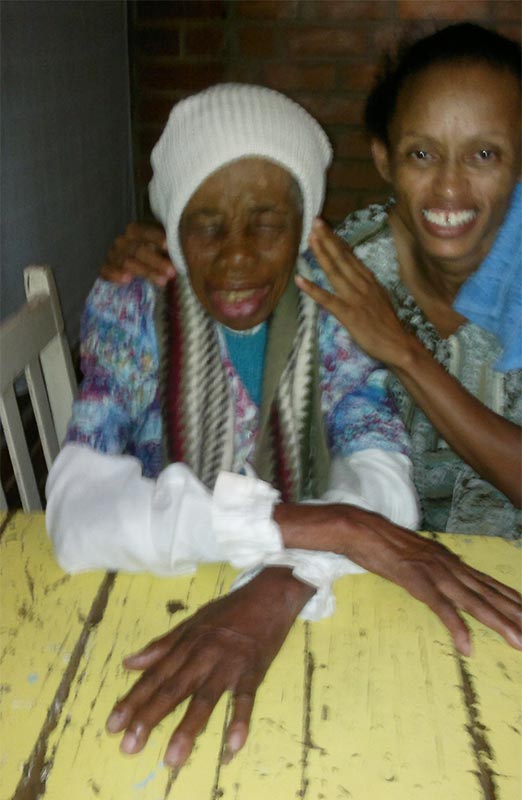 Gogo Malusaba and Sarah Khamal, Aglow Zimbabwe National Treasurer When Nancy McDaniel first became the Aglow Prayer Director in 1999, she cast the vision at the International Conference in Orlando to build the Global House of Prayer made up of people praying in every nation. Eggrinah Kaliyati, Aglow Zimbabwe National President, took that message home to her nation, gathered the GoGo’s (older grandmas) together and told them their job was to build Zimbabwe's wall in this House of Prayer. They became Aglow’s special team of intercessors praying for nations they had never heard of, critical needs in Aglow they didn't understand, and many other issues, but they prayed without ceasing night and day.

Nancy writes, “Only heaven knows how their prayers effected the course of world events. And always they prayed for Jane and me. Eggrinah gave them pictures of us (simple snapshots taken at conferences) which they hung in their humble rooms. Such warriors of whom the world is not worthy. One of the greatest honors of my life was to meet them, kneel before them, and have them lay hands on me to pray.”

Recently Gogo Malusaba went home to be with Lord at the age of 93. Eggrinah writes, “Gogo Malusaba was 93 years old and still very strong despite being totally blind for 10 years. After taking ill with an infection I took her to my house for 11 days to take care of her. The Aglow Zimbabwe National Board visited her often. We wanted to give her a good send off as we realized her condition was not good. Gogo Malusabe was very jovial, singing and praying for us right up to the last day.”

Eggrinah continues, “Gogo Malusabe was so special to John (Eggrinah’s husband) and me, as she was one of the very first people we took from the streets before we opened our old people’s home. She lived with us for 2 years before she moved in with the others in our home for the elderly.”

Near the end Eggrinah asked her what was in her heart. She replied, “Nothing but gratitude to God that many years ago Nasi (Nancy) and Jeni (Jane) asked us to help in building the house of God on our knees in prayer from Zimbabwe. Even now I am still building the House of God. So I am happy and thankful for having been one of the builders.”

The effective, fervent prayer of a righteous man avails much. James 5:16