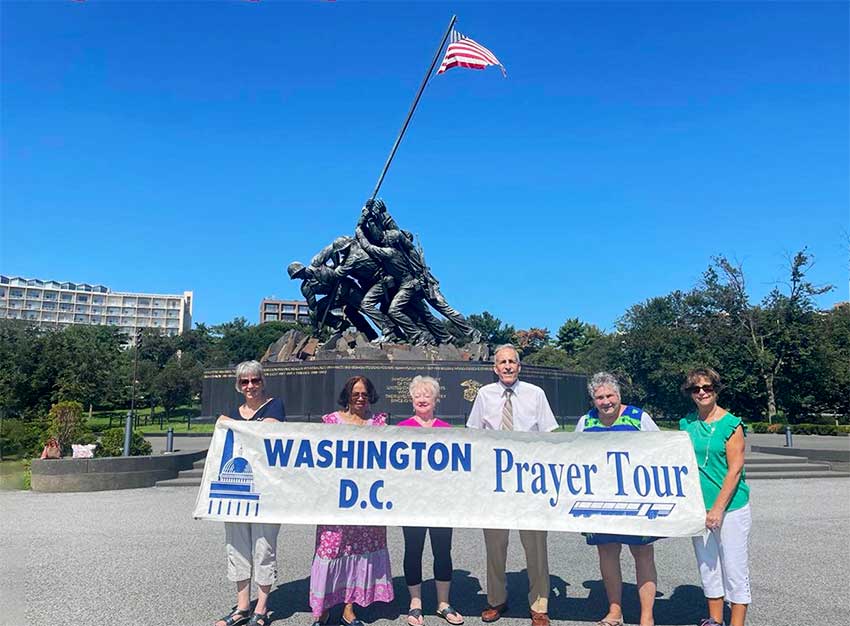 During the month of August, Christine Poitras, New England Regional Director, and a team consisting of Rose Duran, former State Prayer Coordinator of Maine, Michele Fournier, Area President of Massachusetts, Carmen Ray Calvo, VP of Special Events on the Massachusetts Area Team, and Elaine Marine, State Prayer Coordinator of Rhode Island joined their faith together to pray for America in Washington, DC. As they drove through each state, the team made declarations over the states.

Chris said that she had a regional conference call before the trip began and there was a powerful time of prayer and proclamation over the team. Several sent financial gifts to help support the team on the trip and it was seed well planted in the nation’s Capital.

The team stayed at the America Christian Trust where they enjoyed a continental breakfast each morning and the host of the Trust shared insights and history, as it was the first time for each member of the team to be in D.C. on the prayer journey.

On Sunday morning, Jeff Wright, Director of the National Prayer Embassy took the group on a prayer drive through different embassies and other historical places. It was a powerful time of prayer and worship. As they drove near the Supreme Court, the group was surprised to learn that across from the Supreme Court building, a block of townhomes owned by Christian ministries are positioned strategically to cover the Justices as they deliberate and make decisions.

Next, the team stopped in at David’s Tent to participate in worship, praise, and prayer. Again, David’s Tent is strategically placed to shift the atmosphere in a town where battle is constant in the heavenlies.

On Monday, the day began at the American Center for Prayer and Revival where Wayne Garland who works with David’s Tent and Every Home for Christ shared his great love for the Lord and compassion for all. He spoke about the lawlessness of the day we are living in, but we can be at peace in the midst of it all. He mentioned that this is a time to prepare for the coming harvest, yet to be at rest. We must live out of our first love and live in the redeeming of time. Be like Jesus in only saying what the Father says. He encouraged us to not pick up the heaviness of crises around us, as God’s yoke is easy and His burden light. He reminded the team that God can and will save a nation in a day just like He did with Nineveh. The time with Wayne was a divine appointment.

The next meeting took place with a woman strategically placed to give us insights into the world of Islam. She works alongside another friend of Aglow who meets with pastors and leaders in communities where they are equipped to recognize the dangers of Islam and to be aware in every community.

The next stop was at Faith and Liberty where a tray of fruit was waiting for the group as well as great information. As this ministry is housed in one of the townhomes across from the Supreme Court, the team heard firsthand of the chaos of the protesters as the decision of Roe vs Wade was made public. It is an honor for Aglow to continually hear from those on the frontlines on a daily basis. It causes each monthly group to be able to pray from an informed view and to bind and loose, and to give encouragement to those who might be weary.

The group began early in the morning on the third day at Family Research Council. The team heard from Leo, the security guard who was on duty several years ago when a man came in to shoot up the place. Leo stopped him and it saved many lives. It is always a joy and honor to be informed and then to agree in prayer with others who live in the Capital.

Before lunch, the group was able to meet with Jason Hershey who has overseen David’s Tent for several years. As the team began to pray for him, he began to sing in the Spirit. One in the group felt like it must have been a similar sound to what young David released as he watched over his father’s flock. Jason prayed over Chris as a new regional director. It was a precious, strategic time for all.

The team brought dirt and stones from their region and went to the Potomac River where they tossed the stones in the river remembering that Joshua was told to build an altar of stones in the Jordan River. Chris said, “We brought a stone from each state in our region along with dirt and sand. We sang, prayed, and threw the stone in the river, leaving dirt there as well.”

Chris continued, “As we returned to the American Christian Trust, we spread some of our dirt and sand as we took communion outside on the lawn. We felt our mission had been accomplished in D.C.”

After the team returned home, Chris asked each one to share about the trip.

What spoke to me about the people we met was their unity with fellow Christians and their total surrender and sold-out passion for Jesus and serving Him. God placed them all in D.C. years before the current climate in our nation. He knew ahead of time. The prayer was wonderful as we prayed with each group we met. It was especially heart-warming to hear about monthly ministry to certain groups. One thing I will never forget came from a Korean visitor who said that we must gaze at Jesus and only glance at the world around us. I am so thankful I went on the trip. I loved it! - Michele

I can’t say thank you enough. I was so blessed on that trip, that I have no words to describe it. I thank the Lord that you allowed me to be with you. It was a special experience and the prayers were incredible. It was wonderful and my spirit was lifted up. - Carmen

I couldn’t come close to speaking about one experience or another...too many and very precious, so I have made this summary statement. ‘We have heard this type of thing from many a speaker at our conventions, but my eyes were opened wider on our recent D.C. trip. Aglow is truly esteemed and honored by many leaders and ministries. Our standing goes before us, opens doors of experiences before us, welcomes us among God’s shining ones, and trails behind us.’ This is so humbling and I'm very thankful that God has called me to partner with Aglow’s footprints in the earth…especially for these times. - Elaine

As a prayer ambassador, seeing the state of the U.S. prayer covering that goes 24/7 right across from the Supreme Court was so encouraging. Also, to see so many aides and pages, who are not elected, but serve those who are elected, and have felt they have been called to those positions and officials and are born-again believers. They come over to ACPR (American Center for Prayer and Revival) and pray on their lunch breaks. We hear so much bad news, but this is good news…prayer going on all around the clock. - Rose

I am amazed at what God did and what we participated in. We had boots on the ground. I know much was accomplished in the Spirit from the day we left Maine to the day we returned. We felt such unity in the Spirit with each other and all took part with the uniqueness of their personalities and giftings and we felt that connection with all of those we met along the way. Only eternity will tell what all of our regions have deposited in D.C. and what truly was accomplished for His Kingdom. Thank you Aglow and all the leadership at Headquarters. Also, thank you Nancy McGuirk and Alice Holland for setting up our agenda. God knew who we were to meet and where we were to go. Thank you, Aglow in New England, for your prayers and support. It was WONDERFUL and you all were a part of it. God Bless America and the Aglow International Ministry!!  - Chris

Since 2008, Aglow has been taking prayer teams into DC building relationships with like-minded ministries who are standing in the gap over our nation. To those of you who have gone, thank you. And to those of you who are now hearing the call to go, thank you. God has positioned us spiritually, giving us the keys of the authority of His Kingdom, and He has positioned us geographically. Occupy until Jesus returns!