Aglow in a Box 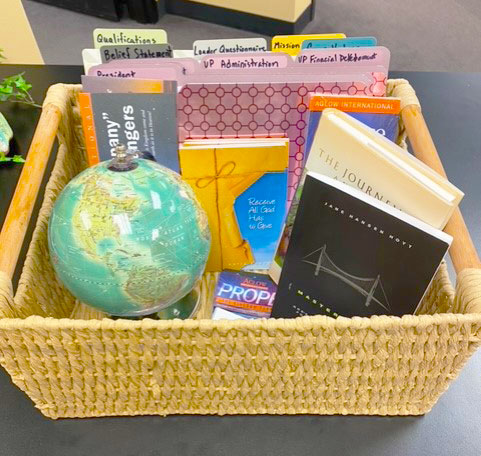 Several years ago, the Lord gave Aglow International a prophetic word that we would have an Aglow Lighthouse in every town and city in the United States (and around the world). The Area Team from Nevada Eastern High Sierra California and Colorado River, Arizona has planned to be prepared for this great harvest that is coming.

Darcy said, “We made what we called at first, “Aglow in a Box.” Later we named it an “Alabaster Box”, and we filled it with everything we would need to go to a town and put on a Lighthouse meeting. Each team member has her own box.”

Below are the contents of the box.

Each team member is prepared:

The idea is that as the team prepares to go to a town, they pray and make decisions about:

Also included in the Alabaster box are:

“So far, we have taken our boxes to two towns where we had contacts. In the first town the team practiced with only one attendee who gave them great feedback. As a result of the feedback, we included a brief history of Aglow. In the next town we had such a positive response that we have decided to include in our boxes descriptions for each position and Leader Questionnaires.

We are excited to reach out to towns in our area that have never heard of Aglow or had a Lighthouse. We have been praying for years for the harvest and now we feel we are more prepared.”

In asking Darcy and the team about how they advertised the meeting, Darcy said, “A team member, JoAnn Growcock, asked the contacts she had to help her advertise the meeting. She, also, asked her contacts for information about local newspapers and sent in the info for the meeting to them.”

In asking Darcy how they selected a venue for the meeting, she replied, “JoAnn lived in both of the communities in the past and had great ideas of places to contact.”

In asking Darcy how they funded the two meetings, she said, “We received offerings at both meetings and received a total of $600. We believe this was evidence that the women who came were excited about the possibility that Aglow was coming to their community.”

We asked Darcy about the possibility of the team overseeing a Game or LifeChanger group for potential leaders in either of the communities. She answered, “One town is an hour’s drive from our nearest team member and it would be difficult to drive there weekly. The other town is two hours drive away; however, there are two ladies who went through GameChangers last year and they could help us.

Also, our State Prayer Coordinator, Barbara Takeda, has been hosting telephone GameChangers regularly for a few years, so we send potential officers her direction if they live far away.”

To the leaders of the Nevada Eastern High Sierra California/Colorado River AZ Area Team, we love how you have prayed, sought God, and gotten ahead of the harvest. Thank you for sharing your God idea with the Aglow world so everyone can prepare for the harvest in their Area by raising up a Lighthouse in every town. To God be the Glory!