A few years ago, Jean Priest had the desire to bless the local law enforcement officers in Duluth, MN. She began a program called Adopt-A-Cop, and since that initial gathering, it has grown in favor with not only the police departments, but the fire department, too. 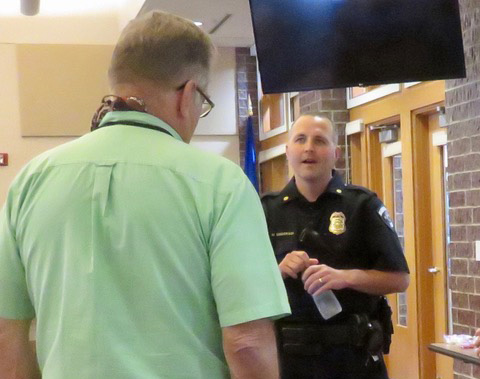 This year, the Duluth Aglow prepared lunch for the Hermantown Police Department. Because of the consistency of Jean and those who come alongside to reach out through prayer and food, word has gotten around that it would be fun. Jean said, “Because we have prepared so many meals for the Duluth Police, we are feeling like experts now.” The local church joins the Duluth Aglow in purchasing, preparing, and serving the meal.

This year the Fire Department was invited to join in the fun.

Jean reports that there was a joyful atmosphere from start to finish and the departments were so appreciative of the great lunch. Because of the shutdown with the Coronavirus, Jean wasn’t sure who would show up to help and who would show up to eat. One of the men from the church checked to see where the next meal would take place as he wants to be a part of the team again.

While the Hermantown Police Department is a smaller department, the crowd was smaller than usual which gave an opportunity to talk with those who were there. Jean noticed that the hardness in the soul of some of the officers was gone. They were friendly and grateful for the lunch; however, there is no place where they can let down and relax. Some received calls while they were eating and had to leave, leaving no opportunity to pray for them.

Jean has noticed that the scope of the Duluth Lighthouse seems to be shifting to one that reaches out more into the community. That is a good thing, right? Yes, Jean, that is good. Follow where the Lord is leading.

Jesus said in Matthew 5:14-16, “You are the world’s light—a city on a hill, glowing in the night for all to see. Don’t hide your light! Let it shine for all; let your good deeds glow for all to see, so that they will praise your Heavenly Father.”

Thank you, Duluth Lighthouse for preparing meals to bless law enforcement and first responders in your community. Through you they will taste and see that the Lord is indeed good!