A Terrifying and Miraculous Experience 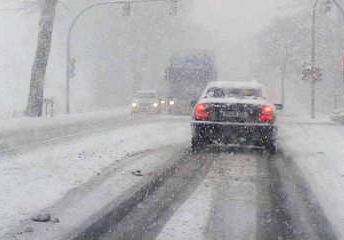 After seeing an exciting baseball game in Milwaukee, Bob and Faith Murray decided to get an early start the next morning so they could travel a good distance home before dark. Driving home, the weather turned from rain, to sleet, to a full-on snow storm.

Faith writes, “As I was driving, I came upon a tractor trailer truck in the slow lane. As I was accelerating past him there was a strong gust of wind. The wake from his front tires sprayed us with water and ice causing us to hydro-plane backwards, making it look like we were going to hit the back of a moving truck. I suddenly had no control of our vehicle, but praise God, He did!”

“We literally were moved back into the left lane and flew over the shoulder into the grassy medial strip between the north and south-bound lanes. Only our Guardian angels could have prevented us from hitting that truck. It was a terrifying few minutes when it felt like we were flying in our car. We seemed to pick up more and more speed as we slid into and through the snow-covered grass culvert and up onto a mound that supported a crossover road that was between north and south lanes.”

“After flying up the mound we came crashing down with so much intensity that we bounced and flew another 20 feet or beyond the crossover road before we finally landed and came to a stop facing the south-bound lanes. We thank God that this section of road was rural and the medial-strip of grass was very wide (about 4 car-lengths). Otherwise we would most probably have landed up on the south-bound lane which had a lot more traffic heading into the city. We are so grateful no other people or cars were involved!”

“Bob and I experienced some serious back pain from the impact of hitting that pavement and then landing so hard on the grass area. The policeman who was first on the scene was amazed that the air bags had not deployed with the impact we experienced, and thought it was miraculous that there was not more damage to the car. After being checked out by the First Responders, they felt we should go to the hospital for evaluation and X-rays. Both of us were eventually diagnosed with severe lower-back muscle strains, given pain meds, and released from the hospital.”

“After getting home we went to visit our chiropractor who believes Bob may actually have a compression fracture from the impact of the accident. Now we are believing that God will be glorified in this circumstance, and that by the stripes Jesus bore for us over 2000 years ago we are healed! We are so grateful for the prayers of our Aglow sisters. God spared our lives in this incident because He is not done with us yet here on earth, all to His glory.”