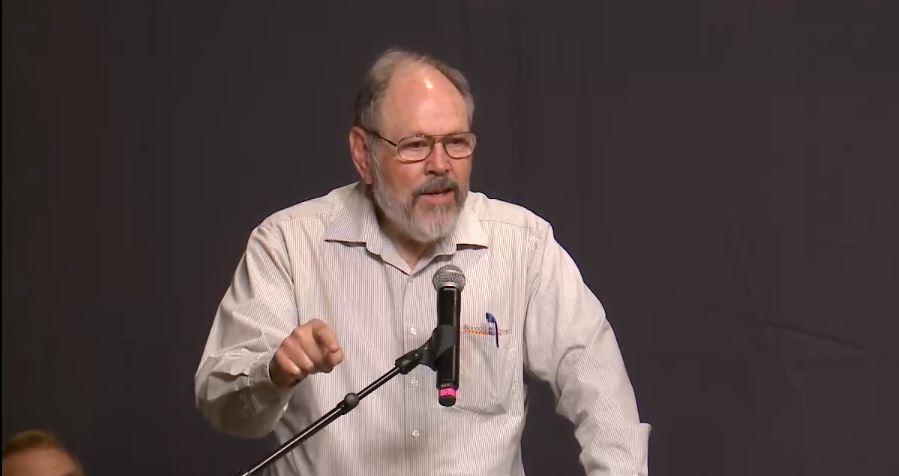 In the 9/11 morning session Dan spoke on our identity as believers in Christ being a corporate identity. We are living stones, built into a holy house, in the body of the Messiah, and this identity is tied to Israel.

Read the blog from this session:

The Identity of the Church in Israel

In the 9/11 morning session Dan spoke on our identity as believers in Christ being a corporate identity. We are living stones, built into a holy house, in the body of the Messiah, and this identity is tied to Israel.

Diane Moder, IBOD member and Islam Education Director, opened the session by sharing 9 things that Jesus has done for us.

Glenda Fleming, IBOD member and US Regional Director, shared about her husband Billy’s dream that one day Aglow would never have a need financially. Billy always wanted Glenda to have anything she needed. How much more does the Father want His bride to have everything that she needs? He is taking us to a place of higher elevation in every way.

Dan opened his message by introducing Guy Cohen, the coordinator of one of the Tikkun Global Ministries, called Harvest of Asher.

Harvest of Asher works primarily in the north of the nation of Israel reaching out with the love of God by giving food and supplies to the needy.

At the age of 13 Guy asked his Rabbi about Zachariah 9:9 where the Messiah would come to Jerusalem riding on a donkey. Since today we have cars and modern transportation how was that going to happen? The rabbi changed the vowels in the Hebrew word for donkey to a word that meant material, but this answer didn’t satisfy his question.

At 18 he left the Orthodox way of life and cried out to God to reveal Himself to him. After time in the IDF Guy studied to be an accountant and worked for the Israeli equivalent of the IRS.

At 23 a man walked up to him on the street and gave him a book. When he turned around to give the book back, the man was gone. It turned out to be the Gospel of Matthew (who was also a tax collector).

The Identity of the Church in Israel

Tribal people don’t have a personal identity like we are prone to in the west, they have more of a group or tribal identity.

Our identity as believers in Christ is also a corporate identity. We are living stones, built into a holy house, in the body of the Messiah, and this identity is tied to Israel.

Ephesians 2 talks about how Jesus has made the Jew and gentile one group destroying the barrier, ‘the dividing wall of hostility’ between us. We are alive together, Jew and gentile. Whatever your personal identity, all of these things pale in the identity we have in Christ being raised with Him in Heavenly places.

Paul is using “temple language” in this passage when he speaks about barriers. The temple was a representation of the tabernacle in Heaven.

Now in Jesus there are no barriers. We can go from the court of the gentiles all the way into the Holy of Holies with the status of the High Priest.
There is no longer a barrier between Jew and gentile. We share the same identity. We are now fellow heirs.

Dan summed this up by saying:

The church are those from all nations who have been joined to Israel and its destiny for the sake of world redemption.

In our new identity in Christ we are joined to Israel. We don’t replace Israel. We are now the body of Christ together. We have both been raised with Him so we will rule and reign together in the age to come.

Going Through Pain and Suffering

The generations need to stick together. We both have something each other needs.

It grieves Patty’s heart that so many children and young people are leaving the faith.

She referenced Luke 8:6 about the seed falling on rocky ground, growing up quickly, but then when the trials come people falls away. Much of Christianity today is shallow. So many have no root when things get tough and they get disillusioned with the faith.

We have not equipped the younger generation to know how to go through suffering. They don’t have a clear understanding of why we believe what we believe, so when things don’t go according to expectation they fall away.
Patty is working on a book like a captain’s journal about real life situations where when the enemy has purposed evil in people’s lives, but God has turned it to good.

When Patty lost her son in a tragic fire it sent her into a spiral of questions. She initially felt confused and betrayed.

Joseph must have had similar questions with his numerous betrayals.
Psalm 105:18-19 says that Joseph’s neck and legs were put in irons until what he foretold came to pass. The Hebrew interpretation of this is that ‘the iron entered his soul’ implying that the word went into his heart strengthening his faith.

This is what we want for our children, grandchildren and loved ones, that the knowledge of God will become like iron in their souls so that nothing will move them no matter what comes.

Joseph’s first born in Egypt was named Manasseh which means “God hath made me forget”. Through the birth of his first son God caused him to forget his former troubles.

His second son was Ephraim which means double fruitfulness “for God had made him fruitful in the land of his affliction”.

God Is Close To The Brokenhearted

Look for the “So That’s”

Look for the “So that’s” in your life. Lazarus died “so that” God’s glory would be seen, “so that” they would believe. With the blind man they asked why he was born blind and Jesus replied that it happened “so that” God would be glorified.

Instead of allowing, the problems, the why’s, and ‘who-done-its’ to throw you off kilter, look for the “so that’s” and His glory in every situation.

We closed the session by singing “Our God is an Awesome God.”

There are 4 ways to give a Convocation offering. Find out more here.

To hear the whole message subscribe to the webcast. You’ll have access to view the sessions until January 31, 2020, to watch them as many times as you like. Find out more.