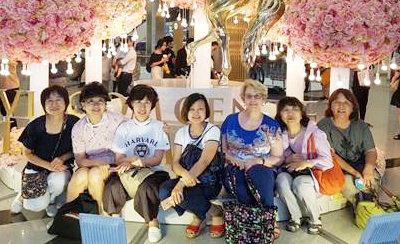 A small team of six Aglow intercessors from Asia and one from Aglow headquarters traveled to the nation of Vietnam in August of 2018. The purpose of this trip was in line with the prophetic word Chuck Pierce brought during the 2017 Aglow Jubilee Conference that there was a move of God taking place in Asia specifically in China, Malaysia and Vietnam.

There still remains a spark of Aglow in Vietnam and it was now time to fan the flame of Aglow in that nation. The team went into a major city with no set plan or agenda. Only to seek guidance from the Holy Spirit and to go wherever He would lead to pray over the land.

Nancy McDaniel, Aglow Global Prayer Director, gave the team prayer points to draw from and shared a word regarding the “strong man” over Asia. This was represented by a hand placed on Asia with the “thumb of the hand” resting on Vietnam. If the thumb is twisted the whole body crumbles. When the power over Vietnam is broken – all of Asia will be free. We believe this time in Vietnam was the beginning of this power being broken.

The team members experienced some opposition on their way to VN. One was a lost passport which was found before departure, and two others experienced delays in their connecting flight and arrived at 2:00 a.m. of the first day. With the strength of the Holy Spirit, they were up and ready to go at 8:00 a.m. meeting with the rest of the team over breakfast and to make plans for the day.

The team experienced great favor over and over again throughout their time in Vietnam.

The first morning the team gathered to view a city map containing strategic places and the Holy Spirit gave clear direction as to where the team should go to pray. Now the team only needed transportation to get to these places which would be very expensive. One team member had a Full Gospel Businessmen contact connected to a tour company. FAVOR! Not only was the team given an air conditioned van and a customized tour to the strategic places the Holy Spirit had directed.…..the van hostess/guide was a Christian woman excited to learn about Aglow. It was a divine connection from God and a future Aglow leader was born!

The places visited on the journey:

A city park where families gathering and people come to exercise each morning. Prayed for families and the generations as we walked the park.

The team felt lead to returned to the finance center once again and went to the 51st floor of a building with a view of the entire city.
The team prayed for the Glory of the Lord to come down and settle over the building and the city. A cloud descended on the building and over the city with thunder, wind and rain. We believe it was a sign from the Lord that the mission was accomplished!

The last evening, the team was invited to a Full Gospel Businessmen’s dinner meeting where opportunity was given to share about Aglow. Many of their wives were present. At the end, the FG gentlemen asked the team to pray for their wives. It was a powerful time of corporate prayer as the women came forward and the Holy Spirit touched each one as the team sang “Sing alleluia to the Lord”.

The team departed Vietnam with the intercession completed and with a potential leader for Aglow and the belief that more were coming. There was breakthrough and the “strong man” over Vietnam was losing its hold on the nation. The assignment was completed.

It is exciting to share the fruit of this prayer journey is now coming to pass. Recently a team of Aglow leaders returned to Vietnam and met with a gathering of women interested in Aglow. The team brought teaching and training to this group. When the team departed, there were six (6) new Aglow groups established! The team has made plans to return to bring further training in the near future.

The Holy Spirit is moving in Asia! The fruit of it is coming forth in Vietnam, Malaysia and China as well as other nations in Asia. It is the “Right Time” for Aglow Asia and God’s word is coming to pass!