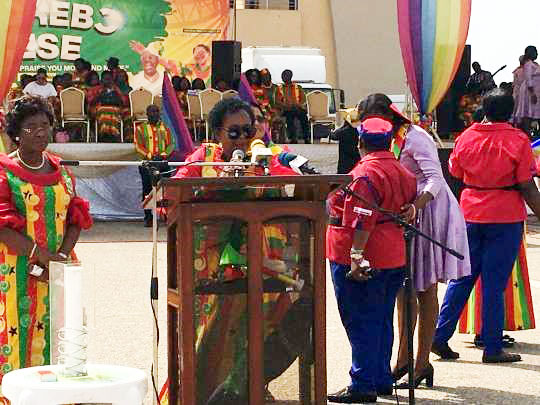 Dr. Mrs. Dorothy Danso, the Ghana National President of Aglow International has called on women to include “rice made in Ghana” in their families diets to help increase the sales of the locally grown grain. She said increased support in sales of the rice would encourage farmers to produce more, which would lead to increased food security in the nation. The Aglow Ghana President made this call over the weekend during the Aglow National Thanksgiving Service held in Accra.

The event dubbed, “Aforebo Kese” centered on the theme, “Oh God, Ghana will praise You more and more - Psalm 71:14b”

The service was graced by various government officials including Mrs Cynthia Morrison, Minister for Gender, Children and Social Protection, Madam Jean Adukwei Mensa, Chairperson of the Electoral Commission of Ghana, Justice Gertrude Torkornoo, among others.

Dr. Danso said another way of promoting food security in the nation was for citizens to engage in backyard farming, as such she urged all women to play a major role in the area of such agricultural activity.
The event ended in a prayer and declaration towards the December 2020 elections, for peace, prosperity and stability in the country.