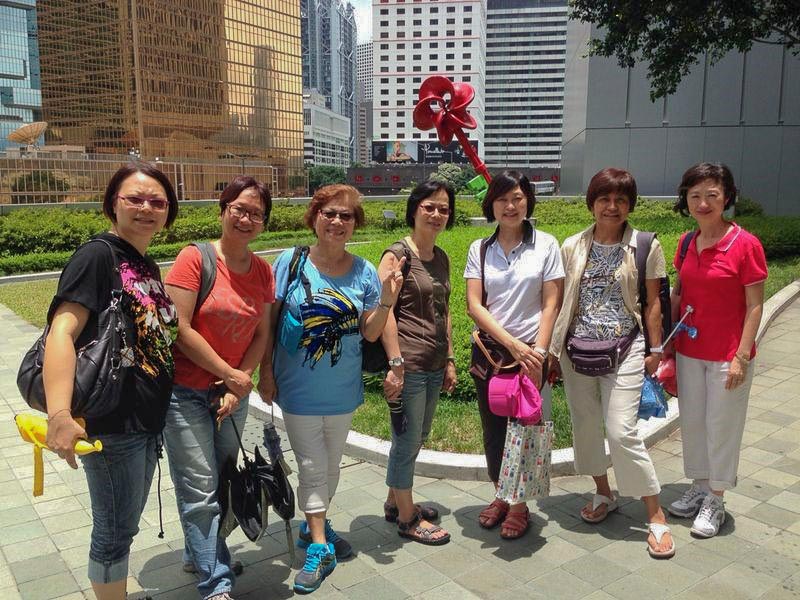 A team of Aglow Hong Kong board members, walkers, and intercessors recently went on a prayer walk in Hong Kong’s Central District. Jane Lau, Aglow Hong Kong National Prayer Coordinator, writes, There was a pervasive sense of peace and destiny throughout the walk. Thunderstorm warnings were taken down just as we started and we had fine weather thereafter.

The date of the walk was the 17th, and we had 17 ladies sign up, a portent of victory indeed! God was there as we proclaimed His presence and His Kingdom come to the Central District. The team confidently spoke His goodness, love, integrity, light, order and a culture of honor over the people, and proclaimed His Word over the workings of our government, legislative Council, and against the prevailing lawlessness of the 'Occupy movement'.

Several of the intercessors met for lunch sharing their experiences of 'God winks' along the way, culminating with God highlighting a huge 'Key to the City' sculpture. Interestingly, the plaque of the sculpture reads, ‘The people are the holders of the key’.

We know that as believers we hold the identity of our nation, and here was the marvelous confirmation that we indeed hold the key to the identity of our city! We came away from our prayer walk firm in the belief that God's presence has forever changed the people, government and the atmosphere over the Central District. We await the manifestation of this in the unfolding news in the future.

I am amazed to report an apparent immediate answer. Having prayed yesterday for the logistics of the Referendum, today we received news that the plan to initiate electronic voting has been abandoned due to the threat of fraud by hacking into the system. God hears our prayers indeed!

Aglow International is a Transformational Kingdom Culture with mindsets not of this world. As a Kingdom Movement, we are committed to seeing God's will done on earth as it is in Heaven by raising up champions and warriors across the earth who will bring freedom to the oppressed while providing opportunities for everyone in our spheres of influence to grow into radiant relationships with each other, as well as, the Father, the Son, and the Holy Spirit.