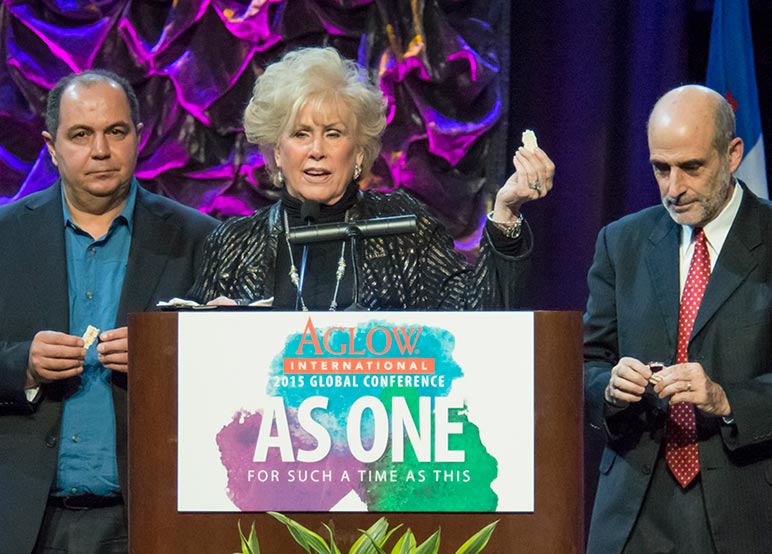 The 2015 Aglow Global Conference held in Indianapolis, Indiana from November 5-8, was another pivotal Aglow event propelling us forward into our destiny as a Kingdom Movement in the earth today. At the conference we joined our voices as a shofar, declaring His Lordship and Kingship over the globe as gentile, Jew, and Arab believers came together.

Below are a few comments from conference and webcast attendees.

On behalf of the Asia Regional committee, I would like to thank you for the amazing work that was done to make the 2015 Global conference a success. It is certainly not a simple thing to organize such a big scale conference, and we applaud you and the team for the excellent achievement.

We are taking time to process all that was shared, and the prophetic shift that took place will move us further in the days ahead. We are determined to come into alignment with Headquarters and endeavor to see each Asian nation walk in this corporate anointing.

The evening before I was to leave for conference I fell resulting in a break in my hand. It was a small fracture, but it kept me from attending. I immediately ordered the webcast and watched it all live from California. The conference was a GameChanger and more, just as I had sensed it would be! My roommate and I communicated throughout the conference and we were in awe.

I just want to thank you all for the waiting on the Lord, the anointing that covered every session, the ease with which you follow the Lord's leading, and the prophetic words, along with the presentation of each arm of ministry. It is an honor to serve in Aglow and reap such incredible harvest in my life, and the lives of those we touch in each portion of this “Apostolic Movement”!

The Global Conference was wonderful, bringing me face to face with Christ again in each Holy Spirit led meeting. I was uplifted, and found myself kneeling before our King and Lord Jesus Christ early every morning during our time in Indianapolis. There is no mistake in God's timetable in this season of my life. Please accept my THANK YOU to all of you who made this conference a significant pivot point for me. Now I am powered up by His Word to effectively implement His plan correctly for Aglow Mt. Hagen in Papua New Guinea. The Mt. Hagen Aglow Team is full of gratitude.

This conference was different! I felt it was like a briefing before going out to the field to win back the territory - marching orders of sorts. The times certainly call for everything Aglow has been preparing for.

I wish to express my experience during the Aglow International Global Conference. I learned a lot during the deliberation at the conference by listening to all speakers who brought new ideas and opened my mind to some information that I did not privy to, which motivated me to read more scriptures and learn more. I felt, and I still feel a changed person. I believe that my spiritual growth has moved to higher levels. I also pray that I will maintain all that I gathered spiritually as well as mentally. The praise team moved me as they sang the praise and worship songs and increased my antenna to reach the Holy Spirit. It was as if the theme “As One for Such a Time as this” was designed for my presence at the conference.