New Openings Into Our Territories 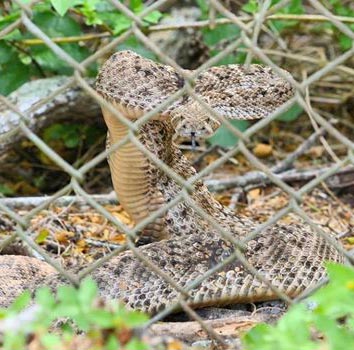 Recently, U.S. Regional Director, Shelly Morales discovered a hole in the fence along her property line after clearing out some dead debris. Through this, the Lord showed her prophetic insight about being aware of the enemy’s unlawful entry into our territory read the story. Shortly after that finding, Shelly and her husband came upon a rattlesnake posted to strike nearby the same hole in the fence.

Shelly writes, “Today a 4 ½ foot long rattlesnake with 9+ rattles sprang up angrily at us, ready to strike. Some days you are just walking through the pastures taking pictures of flowers and birds, and then this happens. I’m thankful my husband had a pistol and is a good shot. Where there's one rattler, there's always more. This is the time of year they are on the move. Even the bites from the little ones can be lethal to dogs and cats. And if we had not cleared the dead debris, we never would have seen the snake at all.”

“After my husband shot it, he climbed the fence (with me praying he didn't fall) to get the snake's carcass and cut the rattles off. As he climbed it carefully, I sensed the Holy Spirit saying that not only will the openings into our territories be revealed, but that we will be climbing in to take new lands that we've never given consideration to before. Also, in cutting off the rattles, he was disarming that which the enemy uses to produce fear, the tool the enemy uses to make us retreat. So in cutting it off, I sensed we are entering into a new season where we won't be limited by the enemy's false alarms anymore.”