You Will Never Be the Same 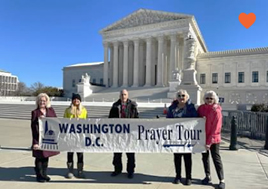 When we arrived in DC, our Lyft driver was from Afghanistan and as we chatted with him, we discovered his mother was still in the country unable to get out, and he has been unable to get any help from any government agency. We told him we would pray for him. Later in one of our other visits, we were able to connect him with someone who could help him.

Saturday the team went to the Museum of the Bible. On the way to the museum, we walked past The American Veterans Disabled for Life Memorial. Beth, Lyndell, and I are also involved with Operation Restored Warrior, so this was also a divine appointment.

Sunday morning Jeff Wright took us on the tour of the embassies. We were able to find parking and take a picture with Jeff in front of the Supreme Court.

Monday the team walked over to Faith and Liberty to visit with another contact we had. That afternoon Jason Hershey came to the house.

Tuesday morning the team went to the Family Research Council. Next, we went to the Dirksen Senate Building where we met Thune’s staffers who took us on the tour, first to his office, then to the Hart building, then to the Capitol on the electric train.

We then proceeded to the cornerstone of the Capitol. This was an assignment for us to re-dig the cornerstone spiritually, break off the covenant with death through Freemasonry and Babylonian spirits, and re-establish and renew the covenants from the Mayflower and Virginia compacts.

We encourage you to go with your region when they go into DC for a prayer journey. You will never be the same.