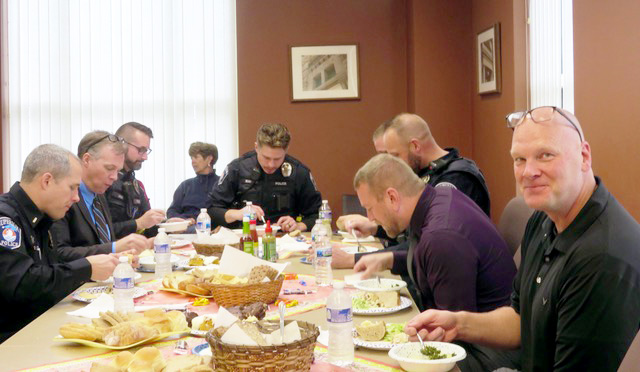 Jean Priest, VP of Public Relations on the MN NE Area Team, writes, “In the midst of chaos and uncertainty, I have a good report. The good citizens of Minneapolis voted to keep funding the police. I was so grateful, I cried. Minneapolis was where all the trouble started last year. What an answer to prayer!”

At the most recent lunch, Jean said, “We went to Superior, WI Police Department to serve lunch. Personally, I wanted a prophetic word for the officers and the staff; however, no one came to me with any prophetic words. I was a little bummed. Then I realized that WE were the prophetic word to the whole department!”

This month, Shelly Breitzmann, VP of Financial Development of the Duluth Community Lighthouse, made a soup out of beef and broth because one of the officers would not eat vegetables. Jean said, “I still do not know how she did it!”

As they talked with the officers, they are planning on prayer walking a troubled area mentioned. They also gave the Chief several Bibles to give at new officer induction ceremonies. Members of Jean’s church donated money enabling them to continue giving Bibles to officers.

Jean said, “What a ministry this all has become. I didn't think this would ever be this amazing when I just took cookies into the police department a few years ago. My head is spinning right now. I still call this "Operation Bear Meat" because my dad used to say that the more one chewed bear meat, the bigger it became in his mouth. That about sums it up.”

When we step out in faith, God opens the way before us. What has He called your Aglow group to do in your community?