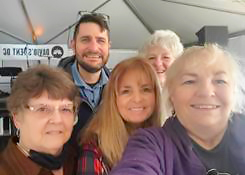 In March a team of four from the GPRMR (Great Plains/Rocky Mountain Region) consisting of Sande Lofberg, Regional Director, Beth Cameron, SPC-ID, Jan Waltman SPC-SD and Laurie Johnson member from Rapid City, SD made the prayer journey into Washington, DC. The Lord impressed “Establishing Truth” as our mission for this trip.

We arrived mid-afternoon Friday and went to our house via Lyft because the security fence surrounding the Capitol included the Capitol South Metro and so we had to change our transportation plans.

A contact we had invited us for Shabbat dinner and we were blessed to join her. She even provided transportation to and from our home away from home.

The next day we visited the Museum of the Bible where we prayed with a young couple that we kept passing and took time to encourage the staff. We left a stone that we had brought with us with Psalm 119 written on it at the Museum.

On Sunday morning, Jeff Wright took us all over DC. We had friends following us on Facebook as we declared the Word and sang and praised the Lord throughout the city. When we went to the Iwo Jima Memorial, a Park Ranger stopped Jeff from holding up his Prayer Embassy banner that he has used for 37 years. That was different! On Sunday afternoon, we also visited with several other connections we have in DC.

Monday we went to David’s Tent. Jason Hershey has been so encouraged by Aglow’s faithfulness to support David’s Tent. He said prior to the election there were thousands of intercessors, but since then, there are very few. Jason shared a brief teaching with us about the worship teams there. They’re forming, then storming, then norming, then performing. We weren’t able to lead a worship set this trip, and he said the staff are fatigued but pressing on. He was coming to his shift early one morning before 5:00 a.m. and noticed the light on in the Capitol. He turned on C-Span and was inspired that the senators were still working and fighting for sound legislation.

We then took the "Hop On Hop Off" tour of DC. Usually we can get on and off but due to COVID restrictions we were only allowed off for a 30 minute stop at the Lincoln Memorial. We continued to declare scripture and planted rocks with scripture establishing truth in the area.

Tuesday morning we attended the Family Research Council Prayer time at 0700. Sande said, “It always amazes me how the Lord brings the world together. A woman asked if I knew people in Wyoming and mentioned some long time Aglow friends. We took a selfie and sent it along to those connections. Then a couple asked if I was Sande and though they looked familiar, I couldn’t place them. They had been on my bus in Israel in 2019. Small world!”

A member of the House from Missouri had made an appointment with us but had to cancel the face to face as she was called back to the House. We were able to have a phone conversation with her later. I scanned and shared our Aglow cards that we leave at congressional offices. She was very grateful for the prayer support.

Sande closed with, “We were so grateful for this opportunity to encourage those on the ground and to be carriers of His Presence in the city.”