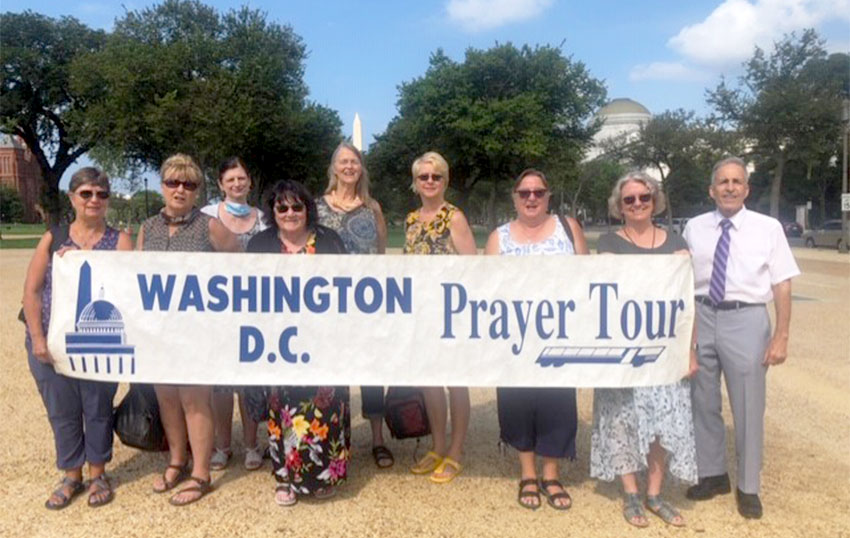 For 12 years each Regional Director has taken a month of the year and led a prayer team into Washington, D.C. In August, the Northwest Region sent in a team of eight. The team was composed of 2 from Alaska, Bev Berdahl and Teresa Baker, and 6 from Oregon, Marta Richards, Robin Harrison, Kathy Redwing, Patty Davis, Sheila Parnell and Marty Lawrence. Because Karan Reed, NW Regional Director was recovering from a recent surgery, she asked Marta Richards to take the lead on this trip.

On the first day of the trip the team arrived and settled in at their hotel. After dinner they gathered to share what they sensed that day and then reviewed the schedule for the next day. The evening ended with a time of prayer.

Before heading out, the team met for prayer and communion. Marta encouraged the team to be alert and quick to obey as the Lord was leading. There was a great sense that the Lord had gone before them and prepared each step.

Their first stop was the Museum of the Bible where they were able to pray with several different people who were visiting the museum. A highlight was meeting the Chief Marketing Officer of the museum who later sent an email to Headquarters thanking the group for their visit and encouragement. His email said, “We need encouragement these days as D.C. is virtually shut down. We (the Museum) were closed for 3 months, but, being re-opened for a few weeks, attendance is light as the local government practically tells the nation to stay away. All this adds up to a tough time financially for the Museum of the Bible. We’ll get through it of course; we have faith that God will sustain us. But it sure is nice to get some human encouragement, in this case from Aglow.”

Later that day, the team joined a group of about 50 people at the Martin Luther King Jr. National Memorial. They engaged in silent prayer and then had a time of worship followed by a time of praying in small groups. The team felt it was an amazing time of prayer for healing of racial tensions.

Early the next day the team went with Jeff Wright for a time of prayer through the many Embassies in DC. After that they drove by several different memorials that are throughout the city. As they drove on the beltway that is the major road around DC, the team asked the Lord to loosen the belt on Christians while tightening it around the enemy. The team also declared several scriptures beginning with Zachariah 2:5, For I, says the Lord, will be a wall of fire all around her, and I will be the Glory in her midst.

Ending their time with Jeff, the next stop was at David’s Tent where they spent time sharing and praying with Jason Hershey who shared about what transpired during the shutdown. They were not allowed to use a sound system. For 45 days they engaged in silent prayer, spoken prayer, and sang scriptures. They were allowed 4 hour watches and whoever led the watch had to carry a permit in their car. They sat in silence for weeks. Jason said, “It took us that long to actually stop and just listen to what the Lord was saying through all of us. It was a gleaning season for some leaving and others being pruned.”

As Jason shared with the team, it started raining gently and then became a downpour for about a half hour. We felt that was prophetic and that God is going to pour out His Spirit on DC….gently at first and then for all to see.

The next day, the team met with a representative at the Institute on Religion and Democracy who gave insight on the persecuted church worldwide. We prayed for truth to be revealed to all those in the State Department who can help with the many places of persecution.

Next they stopped at the American Center for Prayer and Revival, learning many things. A few years ago, two intercessors visited each state capital praying that each state would align with the ancient pathways for revival. The team loved the focus of making a place for God’s Presence to rest as they know Aglow was born of the Spirit, continues to be led by His Spirit today with His Spirit hovering over us.

While praying around the Supreme Court and Capitol, they saw a double rainbow in the sky and called for all God’s promises over the nation to be fulfilled and that America would be all that God purposed us to be.

With several days of visits and prayer left, the team felt that God had them at the right place at the right time, bringing needed information, or allowing them to partner with Him to impart into to others. The NW Region Aglow team felt grateful to be in DC at this strategic time in history.