Prayer and Worship at the Gates of Brazoria County Texas 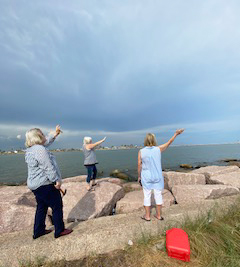 On August 22, 2020, the Angleton, TX Neighborhood Lighthouse met for the first time to pray and worship at the Gates of Brazoria County. JoDee Smith, President prepared a set of wooden stakes by writing scriptures on each one and then anointing them with oil. She said, “We purposed to strike the ground as each stake was driven in and we begin at the County Seat by planting the first stake at the place of Judicial power.

As we began, a group of 9 met on the grounds of the Brazoria County Courthouse to pray for our judges, the juries, attorneys to have wisdom and discernment – to be able to tell the truth from lies in each case that come before the courts. We declared that righteous decisions would be handed down. We prayed for all who would enter the court rooms to have their cases heard – that truth would win over lies and for those who had made bad decisions and choices which led them there – a turning to occur in their hearts to find the only True Judge – the One Who died to set them free – Jesus. We prayed for civil cases and for children who come into the court system to feel the love of Jesus and find peace and healing.

We called every prodigal to come back to Jesus, and we shouted out the command of Moses to Pharaoh, ‘Let My People Go!’ We broke all the lies spoken over our young people and called them to the freedom of life in Christ. Before we left the Courthouse, we released The Blessing and invited the King of Glory into our county to rule and reign. We prayed the stake driven into the ground would begin to grow roots of justice and peace, and an awakening would spread through our county and on through the state and nation.”

The group then moved to the East Gate at the Brazoria/Galveston County Line, again offering up prayers and worship, cutting off evil from entering in through the gate. JoDee said, “We then opened the gate, inviting the King of Glory in. We again released The Blessing to flow out from the gate to the county and also into Galveston County as well to the Grand Jury that is in that county.”

The North Gate at the Brazoria/Harris County Line received prayer and worship much the same as the previous gates, as did the West Gate at the Brazoria/Matagorda County Line. JoDee noted that at the West Gate it was raining profusely on the Brazoria County side, but not as hard on the Matagorda County side. JoDee said, “The heavy rain did not deter our brave VP of Finance, Dodie Armstrong, from stepping into the rain to drive the stake into the ground while the rest of us prayed and proclaimed from the car.”

The South Gate was the last location for this prayer trip. This Gate is located at the intercoastal waterway where ships from around the world enter the Port of Freeport. By this time the group numbered four. JoDee said, “We began to pray, cutting off all evil from entering through this gate and for blessings to flow out of the gate. I spoke to the two storms projected to enter the Gulf of Mexico and to strike the Texas Coast. I asked God to put up a wall to turn these storms away from our coastline. Declarations were made for no loss of life or property, no damaging winds or flooding rains, and no storm surge to erode our coastline. We asked God to turn the rains to the fires in California as slow gentle drenching rains; however, He took the rains into Louisiana!”

All in all, JoDee and Dodie felt that they completed the mission God had laid on their heart. The County is now staked at the North, South, West and East for the Kingdom of God and He is invited to rule and reign in the County.

A note from Kathy Sanders

“I was in Texas on vacation and was able to be a part of this prayer time. It was good to be with a seasoned prayer team that issued a notice to strongholds that their time was up and they must leave Brazoria County. It was also great to see how quickly God answers. The team prayed about the storms and by the time we got home, they had both turn away from striking the Texas coast with the lead storm eventually fading away.”

“I am amazed at the level of maturity of the women and men of Aglow. Equipped to face the end-time giants of our day, I can hear the sound of strongholds falling!”

There will be an additional prayer drive later to visit areas in our county where slavery occurred to pull down divisive strongholds and release freedom for all held captive through actions from the past. The team also has a plan in place to visit each polling place to call for God’s plans to come forth in the November elections.