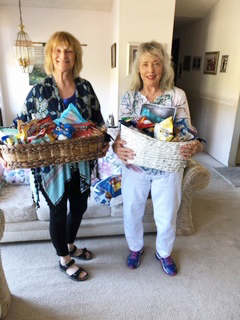 Recently, Christie Spaulding, President of North Sound Area Team in Washington, challenged the leaders in the Area to reach out to law enforcement and first responder groups. One group took the challenge to heart.

The Sammamish Aglow put together 3 baskets filled with prepackaged foods like Kind or granola bars, nuts, chips, cookies, biscotti, tuna from a local cannery, sandwich thins, mayo, and donuts. Then they put copies of Psalm 91 and a card in each basket that told how much their service to the community is appreciated, letting them also know that the group was praying for them to be protected by God. Each card was signed with the name of the Lighthouse and then each individual name, and they included the website address aglow.org.

Because of COVID-19 restrictions, they were not sure what the reception would be. 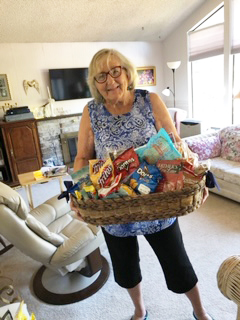 At the first Fire Department, they were not allowed to leave anything because of restrictions. The second place they visited was closed! Not deterred, the group split up and each person took a basket to a different place. And each place accepted the gift basket Aglow brought.

At one police department, the officer who came out was not only masked, but fully armed with all kinds of defense items filling his pockets. He was so nice and greatly appreciated the act of kindness. Even though the officer had on sunglasses and his masked covered his nose and mouth, his voice broke as he was expressing his thanks on behalf of the other officers. He said, “You have no idea what this means to us. Thank you and your group so much.”

As the ladies delivered a basket to the Fire Department in one town, they were given a heads up that ‘their brothers’, the police, were really hurting and made sure that the ladies had the right address to leave a basket.

Because the reception was so positive and the need obvious, the group decide to put together other baskets to be delivered at a later date.

Won’t you back the blue?