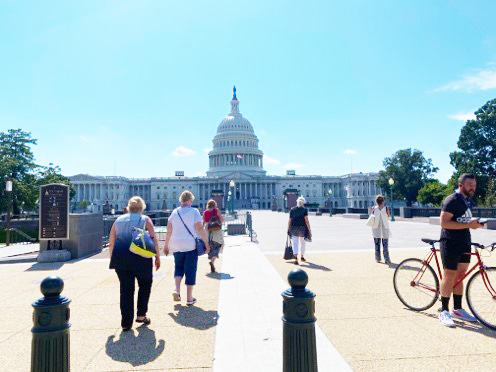 Shortly after the team arrived in D.C., Helen Joy Duperree, SPC for PA sent a word of knowledge. “I see bowls of intercession in the Spirit that have been being filled from (different) Aglow (groups) going into D.C. month after month and year after year. As we have gone in and out and in and out these bowls have been being filled with the prayers of the saints! This is a tipping time Northeast Warriors! As you make you way in D.C. those bowls will begin to tip over with a cumulated effect of synergy as you pray! You will run and not be weary! You will walk and not faint! You will go and collect spoils! This is your day! Did you feel the mountains tremble!”

Arriving on Saturday, local COVID-19 restrictions required the team to wear masks. The hotel shuttle could only take guests to two different locations, the airport or King Street. We chose to go to King Street for dinner and while there, Lanette Beatty felt a trembling, powerful, yet uncomfortable vibration under her feet.

Following dinner, the team stopped at The Creamery for homemade ice cream. From there the team walked to the waterfront, noticing a tangible reduction in the number of people present. It was there that Diane Caliendo began to feel trembling under her feet, making her almost feel dizzy. Remember that Helen Joy Duperree had said to the team after they arrived, “Did you feel the mountains tremble?” As the team began to worship, Diane felt the trembling become stronger.

Before the team left their homes for D.C., Holy Spirit highlighted Ezra 8 to Diane. She saw the team going out in the 7th Month to share the Word of God! As Ezra stood in the public and praised the Lord, the people responded and worshiped the Lord. When he read from the Torah, people started to understand the Word. Then Nehemiah came and said “This day is Holy to the Lord. Do not weep or mourn. Go and enjoy food and drink. The Joy of the Lord is your strength.” The people went away, eating, drinking, and understanding the Word and celebrating. And on our first night, the team went to dinner, had great food, fun, and celebrated the Lord!

On Sunday morning, Cathy read the Ten Commandments aloud and declared them over D.C. and the nation. As the team had a time of discussion and prayer, Diane head the song, Do You Feel the Mountains Tremble? The team then met up with Jeff Wright who took them to Jones Point, the SE corner marker to worship and make declarations. When the team saw a place in the water that was muddy and murky and filled with bugs and mosquitoes they poured salt into the water for cleansing, declaring there would be no more desecration. 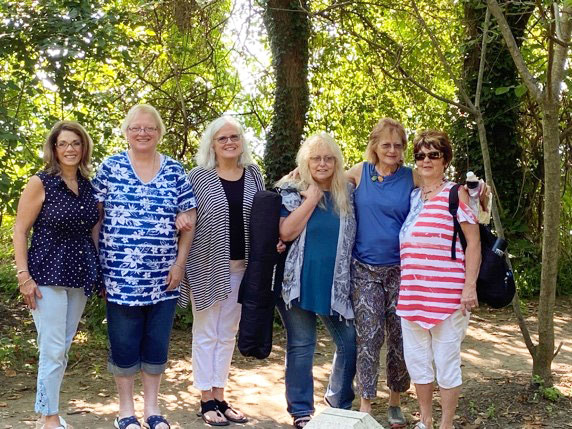 Stopping at the first boundary stone, the team read this declaration aloud, “May this stone long commemorate the Goodness of God in those uncommon events which have given America a name among nations. Under this stone may jealousy and selfishness be forever buried.” Commemoration of Cornerstone, April 15, 1791

The team began to thank the Lord for the covenants He made with His people and took the Communion elements and poured them out on the land. They repented for allowing a religious spirit for coming into our nation, and for slavery and racial injustice, for jealousy, greed, selfishness, and for giving Jezebel a place. They bound lies and compromise and released Truth and prayed the Lord’s Prayer. While they were singing another lady came and joined in and they were able to tell her about Aglow.

Another highlight was the visit to David’s Tent. As the group exited the van, they heard the song, Do You Feel the Mountains Tremble coming from tent. They listened as several gave powerful testimonies of how God is taking what the enemy has meant for harm and turning it for good. The team rejoiced as Jason Hershey told them that praise and worship at the tent was closed down for 45 days and in the midst of it, God provided all that was needed.

Everywhere the team went there were divine appointments. When God positions you in a place, He also provides all that is needed to touch the hearts of people.