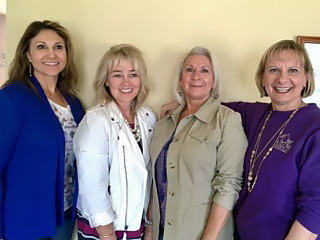 GameChangers groups have been going strong with 6 currently in our region, including 3 in our target city of Anchorage, and 1 at the Faith Wing in the local prison.

Our ‘His Hands’ Aglow sign language group performed a song at our local National Day of Prayer Gathering and was written up in local newspapers. They also performed at a 32nd anniversary celebration for a local church.

The younger women love the “Soaking and Prophetic Prayer Ministry” nights at my home. We have been intentional about mentoring the younger generation. Valley Aglow recently had 3 outreaches geared for young women: sign language, container gardening, and making lip balm classes.

We plan to carry the Aglow Banner in the local 4th of July parade, and serve alongside several community churches at our July Bear Paw Carnival with a Hospitality/Baby Booth. I represent Aglow at our monthly Ministerial Association lunches, connecting with pastors and Christian leaders and building long-term relationships with them.

We are excited about all that God is doing through Aglow ministry in our region.