There Are No Forgotten Lands Or People 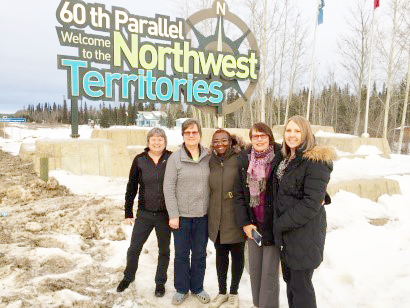 All around the world, Aglow groups reach into the most remote villages in their nations. For several years the National Team in Canada have taken outreach trips into the Northwest Territories.

Darlene Smith, Vice-President of Outreach, has taken teams into Northern Canada. She said, “There are no forgotten lands or people. Everyone has a plan written in Eternity of where they will dwell.”

He made from one man every nation of mankind to live on all the face of the earth, having determined their appointed times and the boundaries of their habitation, that they would seek God, if perhaps they might grope for Him and find Him, though He is not far from each one of us; for in Him we live and move and exist, as even some of your own poets have said, 'For we also are His children.' Acts 17:26-28

As a team traveled to nine communities, they came with a message of God’s love and teachings on identity and purpose that brought it right down to the importance each individual has in God’s eyes. In each community, the people received them with gladness. Darlene said, “It was amazing how love continued to grow for those we meet even after we returned home.”

Not wasting time, another team went into the Northern Manitoba to a place called God’s River. The team could only access this reserve by flying in, noting that this area was 365 miles of the city of Winnipeg.

Working together, the team brought a message to encourage each one as to how they are known in Heaven. Those attending the meetings were asked to consider why they had suffered so much as a people group. Could it be that the enemy was afraid of the call of God upon them? They are a people with a great destiny. Like Gideon, they are valiant warriors. They are to look at themselves as people who will deliver others out of a snare that has made them feel like victims.

Because of severe weather, the team stayed an additional three days and were able to continue to speak life into the people. In one evening gathering, the Presence of God was so tangible that even children were captured in that Holy moment.

The team remains available to those in each location for prayer and contact through Zoom. God is faithful in building and strengthening relationships so that His Name is glorified all across Canada.