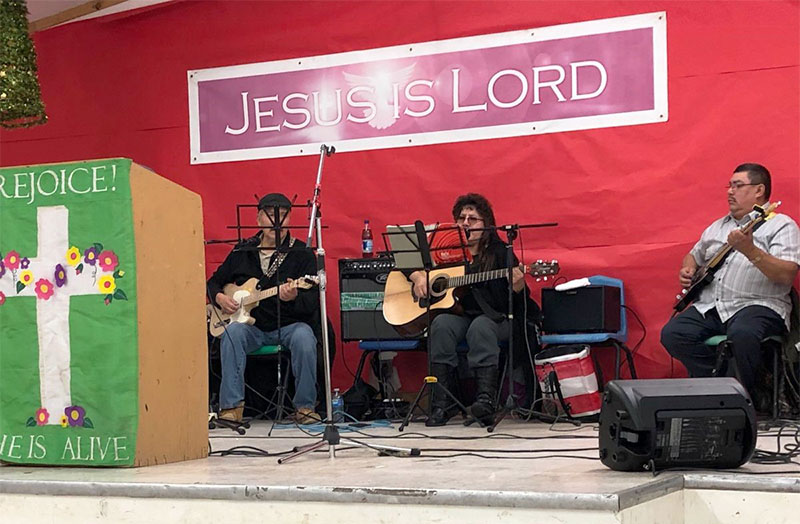 We recently received a report from Darlene Smith, Aglow Canada National Outreach Coordinator, about her quick obedience to God’s instructions.

In November, while I was a part of a leadership training event in Winnipeg I received an invitation from friends in God’s River First Nation, Manitoba. They needed “a preacher” for upcoming meetings in less than two weeks which focused on missing and murdered indigenous women. My first human response was that I had put a lot of miles on in the last 2-3 months and thought maybe this would be too much. In that time I had been in Northern Ontario, Regina, Spokane, North Battleford, Thief River Falls, and Winnipeg. Now I was asked to go north. While going to bed that night after the Winnipeg meetings, I had this strong sensation that the Lord wanted me there as well.

Dutch Sheets prophesied at the National Aglow conference in Spokane, WA, about the readiness we needed in this coming season.

Here is an excerpt from the message.

"There is something so powerful happening in the Spirit in this hour that will cause the purposes of God to be birthed in days….They are going to have to be light of feet.… What I am hearing the Lord saying is, ‘You do not have months in this season. You are going to hear assignments from the Lord and you are going to have to put a team together in a week.’…As assignments come from the Lord, we will need to carry them out quickly rather than taking months to plan every detail." Read the whole message here

Little did I know that the word would be fulfilled so quickly. So, I asked an experienced GameChanger intercessor from my home region to accompany me, and off we went on this assignment to "Preach the word; be ready in season and out of season". (1 Tim 4:2)

While on our way, I was told by the pastor from there that we would be broadcast all over the world through an internet radio station. God had given me a prophetic message for them but I have to admit it was a bit daunting. Trusting Him was in order.

God’s River is beautiful. It is a small community that is fly-in only approximately 588 km (365 miles) north of Winnipeg. I had been there before in the summer but never in the winter. The people are good people. I believe a large majority of them are believers that love the Lord. They have a tremendous sense of humor. We enjoyed them very much.

The word that God gave us was concerning the story and ancestry of Gideon that was similar to their history. Why is the enemy so threatened by them?

Why is he so determined to prevent them from rising to their true identity? They have the call, like Gideon’s, to deliver their people from the oppression of the Midianites who were also kidnappers and Baal worshippers guilty of slavery and prostitution. Sound familiar?

Gideon saw his family as “the least of the tribe of Manasseh.” But, who does God say they are?

We say, “Rise up God’s River! Rise up to deliver your people. God believes in you! We believe in you!” There was plenty of other symbolism involved with this story for them that I won’t go into detail here.

After being delayed there for four extra days due to weather, there were additional assignments and a chance to get to know them more. What a chance for us to be stretched and blessed by the generous hospitality we received. We also had the opportunity to share more on identity. God has given us a future and a hope.

Dutch Sheets also said, "Aglow is going to see things to come in the future, receive instruction from God, and move immediately in obedience."

It is a new season for Aglow. We have to be capable to move quickly and obey the Lord in a “light of foot” fashion.