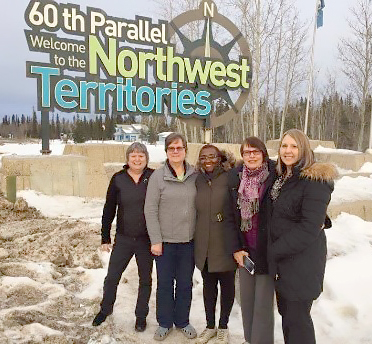 From February 15th - March 7th, 2017 members of the Aglow Canada National Leadership Team went on a 25-day journey across the nation to spread the GameChangers message of Identity, build relationships, and unite with the Peace Country area and Northwest Territories in a deeper way.

The team began the journey by connecting with the Aglow team in Grande Prairie, Alberta, taking the time to get to know the team, to hear their hearts, discern their individual callings, and then do some training on Army and Family.

Outreach meetings emphasizing Identity were held each evening drawing people from the region. The team enjoyed seeing the eyes of the attendees opening up to the love and favor that God has for them through the GameChangers message. Afterwards, both teams worked together to prophecy over the people that gathered in the evening.

On Feb. 18th the Aglow Canada team took a spectacular eight-hour drive into the North West Territories to Hay River. The Lord had spoken through prayer that the team would be “Spectacular” in the NWT. Imagine their delight when they saw the motto “Spectacular” on the North West Territory license plate! One of the highlights was the “spectacular unity” they experienced as a team, and with the amazing pastors God sent to come alongside them, working together in the Kingdom, about the Father’s business in the North as the Lord led.

In Hay River they spoke in a local church in the morning, and then went to the Hay River Reserve for the evening service where they met “hungry people that received us with open arms”.

On February 21st the team headed to Fort Resolution where the first treaty was signed, and the first settlement was established in NWT. There they met with “a precious pastor in a mission that is holding the ground there for the Lord”. They had an amazing time of worship with her and an opportunity to encourage and prophesy over the area and the people.

The next morning the team traveled 4 hours to Fort Smith. In the outreach meeting in the evening there was great interest in the Identity message, as well as interest in getting a GameChangers group started.  A team member wrote, “It was such a delight to connect with faithful leaders who are hungry for God.”

The team then then traveled back to Hay River where they had a full conference on Identity. The worship was excellent, and they could sense His approval on what was happening. At the end of the conference the leaders were commissioned to “take the truth and set the captives free!”

The next morning 2 team members dubbed “The Winter Ice Road Team” left for Fort Simpson while the other two faithful National Leaders headed to Yellowknife to go home.

At Fort Simpson a meeting was held in the evening with faithful believers. One Inuit man especially received the message and was excited to be there.

The next stop was Tulita where the team met in a small church with mostly First Nation’s people in attendance.  They were received well, and trusted that the seed planted was encouraging, as these places are isolated and can get quite lonesome. It was a great blessing to tell the people in isolated communities that people across Canada were praying for them, and they are not alone. Eyes swelled with tears of appreciation.

The next morning the team was on the road again with the plan of picking up two more men who would be joining them, and with the end destination of Fort Good Hope, NWT. There they had an incredible time of worship and introduced the message of Identity. The pastor was greatly encouraged with the other men around him, but also with the message which would help the people understand the great work that God has done for each of us.

After two days in Fort Good Hope, [60 km (37 miles) south of Arctic Circle] the team turned southward again to Tulita, and then back to Fort Simpson the following day.

A team member wrote, “Something was happening to our hearts. They were expanding to love this part of our nation. It was enlarging to love the people that God positioned there. The teams we worked with are filled with passion for this land - to dream that their territory could fulfill its God-given destiny.”

The last meeting was held in Fort Providence where the team spoke at a local Bible college.  A message was delivered about “being saved for purpose”. Providence means “overseen by God’s direction and foresight”. That’s a game changing life. Forgetting what lies behind and pressing forward to the high call of God. Philippians 3:13-14

A team member concludes, “Well, Peace Country Area and Northwest Territories, you are branded on our hearts. We love and appreciate what God has deposited in you. We will see you and your land again!”