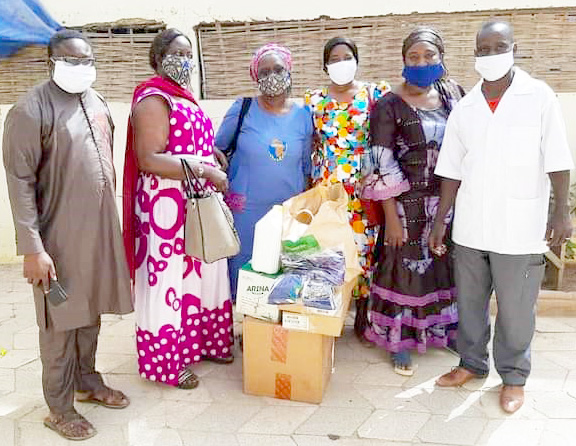 Aglow Senegal National President, Sabadou Sagna, thanks the Almighty God that by His grace, during this time of COVID-19 pandemic, Aglow International Senegal, which forms part of the Christian Community in Senegal, is now seen as the most powerful ministry in the nation, due to all their activities that are being witnessed. She says they are on Facebook, sometimes with short videos, bringing awareness of the Aglow ministry and all its activities. They visit hospitals, taking necessities like soaps, provisions, fruits, medications, clothes etc. to the patients and praying for them. All praise and thanks to God for all that He is doing through the Aglow ministry in Senegal.

Sabadou reported they recently visited a hospital, called Barthime Hospital in Thiers, a town outside the capital, Dakar. This hospital helps Aglow Senegal when they conduct the Aglow free medical consultation outreaches in various communities, by donating medications and other medical supplies. At the time there were six COVID-19 patients in the hospital. Sabadou said that Aglow joined forces with hospital staff and prayed for these patients, and God exalted His name with miracles. Due to this, now any time there is a need to pray for patients, the hospital calls Aglow to the spot to pray. Sabadou testifies that God is healing the sick daily. Alleluia for that.

They traveled to that village and were given a hectare of land. Now they will start processing the legal documentation to put the land in the name of Aglow.

They plan to use part of the land for mornings plantation (unsure of what this means.) They also intend to construct a building on part of it where they can use as a retreat center to be used for prayer gatherings and other Aglow activities.

They are praying for a minivan to use for their trips to the village and outreach in the towns and villages outside the capital Dakar. Also for funds for their various projects.