The called, aware and ready! 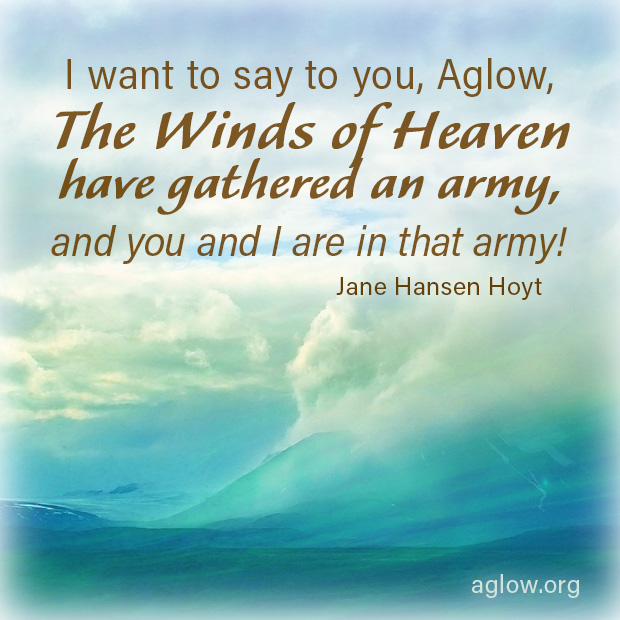 For you yourselves know very well that the Day of the Lord will come just like a thief in the night. When they say Peace and security,’ then sudden destruction comes on them, like labor pains come on a pregnant woman, and they will not escape. But you, brothers, are not in the dark, for this day to overtake you like a thief. For you are all sons of light and sons of the day. We do not belong to the night or the darkness. So then, we must not sleep, like the rest, but we must stay awake and be serious.
I Thessalonians 5:2-6 (HCSB)

I am coming soon. Hold on to what you have, so that no one will take away your crown.
Revelation 3:11 (NLT)

These will make war with the Lamb, and the Lamb will overcome them, for He is Lord of lords and King of kings; and those who are with Him are called, chosen, and faithful.
Revelation 17:14 (NKJV)

We Are An Awakened People

I want to say to you, Aglow, the winds of Heaven have gathered an army and you and I are in that army! We are all participants! Chuck Pierce said, “For the last 8 years winds have been blowing in the heavens. But now those winds are released to come into the earth realm. What has been stirring in Heaven will now blow in the earth. Brace yourself! The winds that will now blow are the winds I’ve been holding back these last 8 years, and now I will release them. I am acting on how you have sought Me in these last 8 years. These winds will begin to gather an army.”

We are an awakened people who are alert and aware of the times we are living in. We know what it means to watch, pray, and take action. God is not in retreat. He intends that His Kingdom expands upon the earth until Jesus returns. We live in a time of triumph and great favor. He has raised us up for this time! We are The Called!
Jane Hansen Hoyt, excerpt from A Call To Unity

There are many references to the number 17 in the Bible and most have to do with VICTORY. One that is especially significant to us in Aglow is the fact that the book of Esther is the 17th book of the Bible and we know the victorious end to that story.

Based on research related to the number 17, the conclusion is that 2017 will be a very significant and pivotal year. It will be one of amazing victories and major shifts in both the natural and spiritual realms. We are aware of the seismic shift that took place in the United States of America in November, 2016…a shift that will ultimately impact the nations of the world.

(Adapted from a prophetic word released through Diane Fink, Director Middle East and Director Aglow Institute of Ministry. Read more of Diane's insights on the number 17.)

Declare the Word of God as you pray for Israel

There is a hunger for the fullness of new life in Christ among men. Men in several nations are growing as they share together as Men of Issachar in GameChangers groups.

Christians around the world are facing persecution in unprecedented numbers. Yet, in Hebrews 13:5 Jesus says, “I will never leave you, nor forsake you.”

Pray for Christians in nations of central and northern Africa who are facing persecution. The influence of radical Islam is continuing to expand. There are numerous rebel insurgent groups targeting Christians. Economic instability brings further oppression for many.

Aglow Prayer on Twitter is also available in Portuguese @AglowPrayerPT. Pray for expansion into other languages. If you need help getting set up on Twitter, go to http://twitter.com/ or contact This email address is being protected from spambots. You need JavaScript enabled to view it..