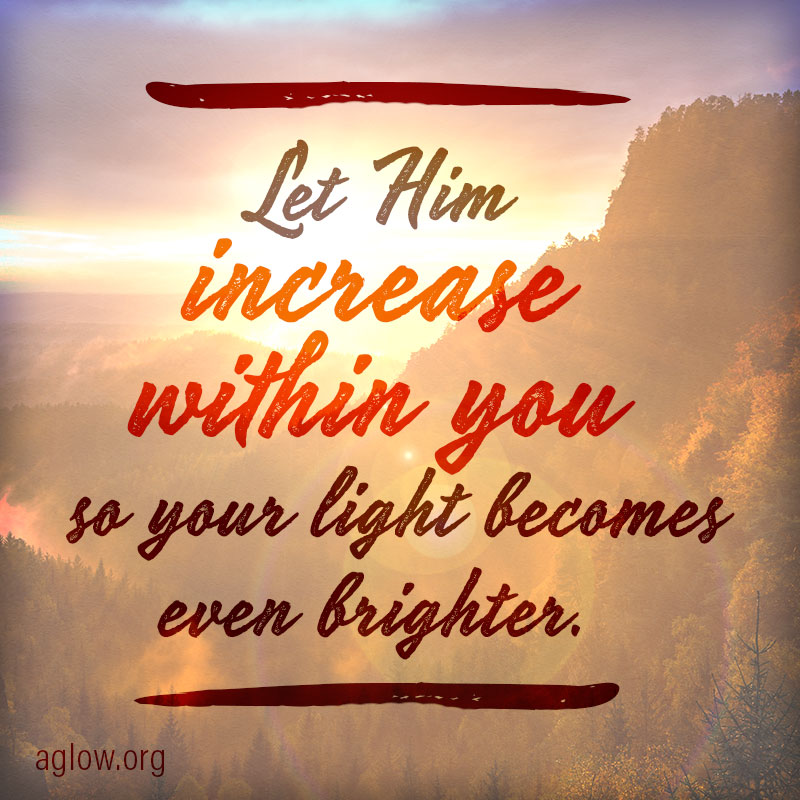 This is an excerpt from one of Jane’s blogs. For the complete blog see Let Him Increase.

A friend of mine brought my attention to an article recently published in Charisma magazine. The title was, “Do You Hear the Alarm?” The author was speaking about a storm coming. I am not an alarmist by nature. Yet, with the increased sound of hate speech and violence in the world, it is impossible to not realize we are living in times that are revealing greater darkness. The need for light, brilliant light is being sought out in an ever-increasing way. People are looking for hope, for encouragement, and for the firm foundation that truth brings. . . I feel there is an urgency to take some necessary steps, as the Lord has been prompting. We do this without a sense of fear, but of preparation.

Let Him increase within you so your light becomes even brighter.

Then God said, “Let there be light”; and there was light. And God saw the light, that it was good; and God divided the light from the darkness. – Genesis 1:3-4

Then Jesus spoke to them again, saying, “I am the light of the world. He who follows Me shall not walk in darkness, but have the light of life.” – John 8:12

A Right Time For Israel

Jerusalem, often called the epicenter of the world, is a key focal point in God’s dealing with the nations. Jerusalem is the most strategic spiritual battle front. Jerusalem is where our Lord Jesus will once again place His feet upon the earth. We join with the followers of Jesus in Jerusalem to welcome Jesus’ return saying, “Blessed is He who comes in the name of the Lord!”

On October 6, Aglow International is partnering with millions of intercessors around the world on the Day to Pray for the Peace of Jerusalem. We urge everyone to add your voice to this worldwide concert of prayer.

Worship Christ who is above every principality, power, might and dominion! Declare His Name is glorious – His Name which is higher than every other name!

Celebrate your place of relationship, intimacy and power in heavenly places in Christ Jesus! Declare that every work of the wicked one is crushed under your feet as you are positioned in Christ.

We are positioned in Christ to overcome every work of wickedness. Declare that you are an overcomer. Declare the righteousness of Christ overcomes every opposition that stands against Christ and His purposes in your life and in your nation.