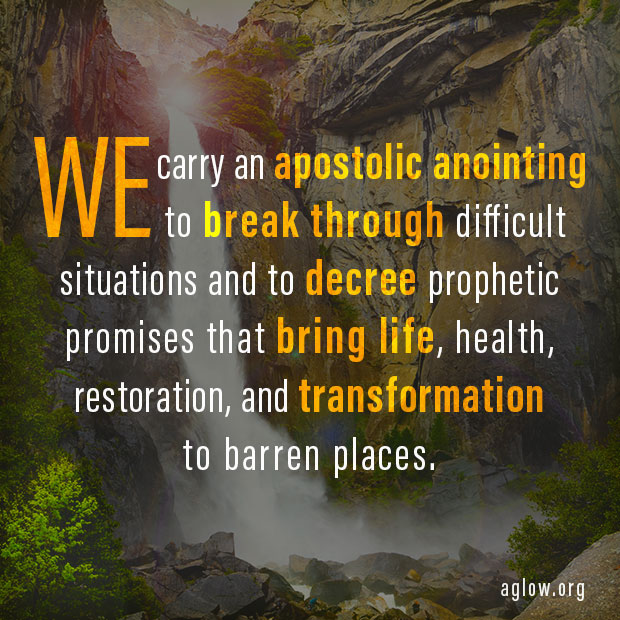 A New Weight of God’s Glory is Upon Us

This is an excerpt from one of Jane’s letters. Complete letter

Dutch Sheets said to us that this is a year of birthing and that Aglow has come into a greater anointing to deliver the purposes of God in the earth. It was also said that a new weight of His Glory is upon us. I believe there is an elevation of Kingdom truth at hand. At the same conference, Chuck Pierce told us that God has positioned Aglow as apostolic-prophetic watchmen who decree and declare His will on earth. This means that we are entrusted to pray and intercede for the need of mankind to know Christ and the life-giving power He has made available to each one of us. We have been upgraded in our authority to break through the barriers that hold humanity captive, prophetically speak life, and see that life established in people, communities, and nations. It means that we carry an apostolic anointing and strength to break through difficult situations and to decree prophetic promises that bring life, health, restoration, and transformation to barren places. NOW is the right time for us as we rise to a new level of leading the world into a whole new place. Your commitment is a vital part that opens the way for breakthrough in the earth!

The earth is the Lord’s, and all its fullness, the world and those who dwell therein. For He has founded it upon the seas, and established it upon the waters. – Psalm 24:1

Decree to the Nations:

We are praying for Aglow to be affiliated in every nation of the world. We are very close to reaching that goal. Let’s continue to move forward together, a company of champions and global leaders of significance, to see Every nation touched, every heart changed.
This month pray especially for: Monaco, Montserrat, Nauru, New Caledonia, Palau