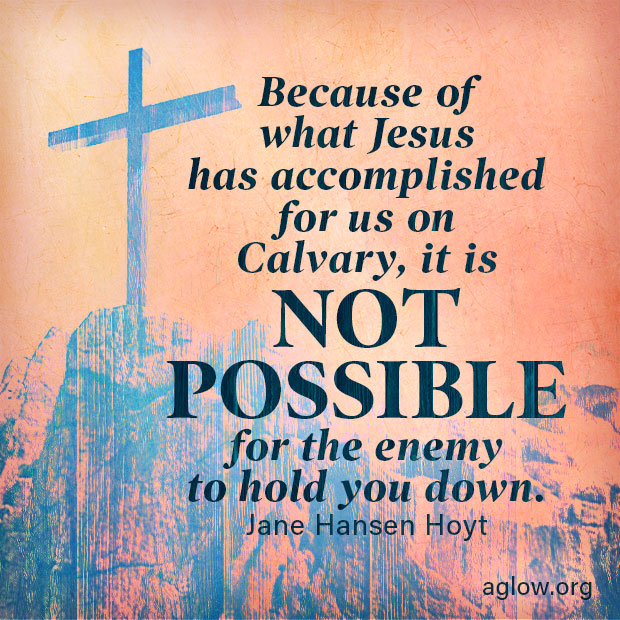 This is an excerpt from one of Jane’s blogs. Read the complete article What a Savior.

When Peter stood with the eleven, speaking to the men of Judea and all who dwelt in Jerusalem, he prompted them to recall the words spoken by the prophet Joel regarding the outpouring of God’s Spirit in the coming days. He stated that we would see wonders in Heaven above and signs in the earth beneath.

Peter went on to affirm that God raised Him up, having loosed the pains of death because it “was not possible” that He should be held by it. (Acts2:24)

“Was not possible.” Think about it. It WAS NOT POSSIBLE THAT DEATH OR THE GRAVE COULD HOLD HIM. Oh, the victory of the cross and the victory of Heaven over the work of Satan.

Because of what Jesus has accomplished for us on Calvary, IT IS NOT POSSIBLE FOR THE ENEMY TO HOLD YOU DOWN. It is not possible that you live hindered by confusion or intimidation. Heaven does not whisper to you about your inability or lack in any area of your life. Satan is already defeated, and he has no right to overcome again. Remind him of his defeat and align your whole being with Heaven, because Heaven wants to use you as a trumpet sound in the earth regarding the victories Jesus died to give us.

Crush Chaos – The God of peace will crush Satan under your feet. Romans 16:20
Take Mountains – Declare the Kingdom of Heaven! Give me this mountain! Joshua 14:12

Venezuela – Crush the Chaos and Declare “Grace!” Upon the Mountains

Decree LIFE! Crush the Chaos and Decree LIFE for Families

According to the World Health Organization, an estimated 40-50 million pregnancies are ended by induced abortion each year. Jesus came to give life – physical life as well and spiritual life.