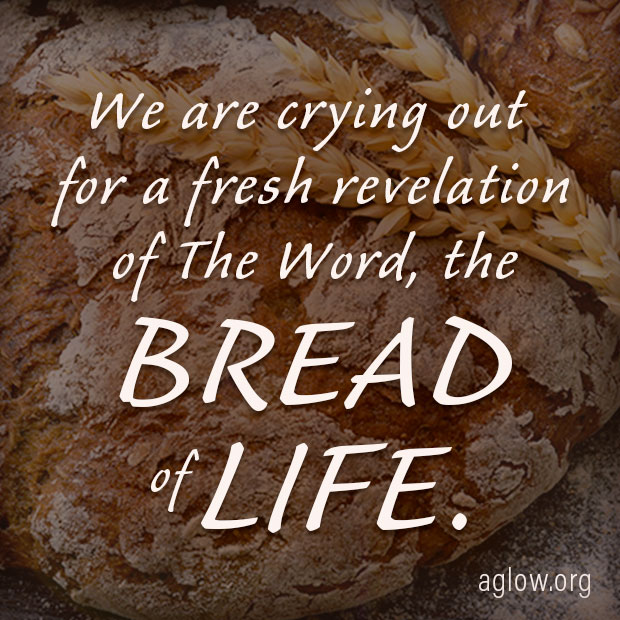 We Are Hungry For You, Lord

This is an excerpt from one of Jane’s Face Book posts. Follow Jane on Face Book

I believe that God has called Aglow to be one of those ministries that not only will allow, but will compel the Holy Spirit to flow into our lives as individuals, and as a ministry, to display His Glory in a way not yet seen on earth. So many words have been given to us regarding this very thing.

I think of Naomi in the book of Ruth when she heard that the Lord had visited His people by giving them bread and she returned to the place of bread. There is a hunger for bread today. There is a restless stirring and desire for more than what we have known, or have eaten in past times. We are crying out for a fresh revelation of The Word, the Bread of Life.

Hunger is a sign of health. Appetite is a sign of an increasing desire for more and more and more. Books, sermons, and conferences that once hit the mark for us, feeding us in beautiful ways, no longer seem to draw us in the same way. The absence of that desire…and even the absence of what satisfies…is a clear sign that God is not withholding anything good from us, but is allowing a season of hunger to increase within, so that we will step into a deeper place of relationship and communion with Him.

In aerial warfare, air supremacy is the highest level of dominance when one side holds complete control of the skies. God has given us this domination over the works of the darkness in the earth. Decree the Kingdom of Heaven into the nations! Drop spiritual “bombs” that defeat the works of darkness on earth.

Declare the Kingdom in Our Schools

Read Turn Back the Battle at the Gates of Our Schools

Portugal – Aglow Coimbra, a beautiful riverfront city in the middle of Portugal, promoted an event recently on the theme of Anti-Trafficking. It’s name? "Justice in an Upside Down World". Marta Correia, a young lawyer who works with the International Justice Mission and spoke for this event. The President of the Observatory of Human Rights was present. He commended Aglow in a report sent to the Prime Minister. Aglow in Portugal is on the move and is reaching the nation!

Pray for expansion into other languages. If you need help getting set up on Twitter, go to http://twitter.com/ or contact This email address is being protected from spambots. You need JavaScript enabled to view it. .