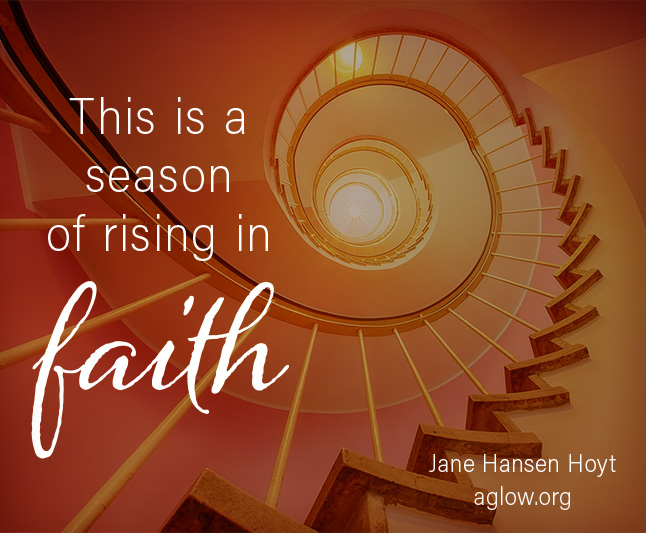 The Year of FAITH

This is an excerpt from Jane’s blog, The Year of Faith.

Together, we greet the new year, 2019. The number nineteen is the number of FAITH!!

I have sensed the Lord saying to me that in 2019 we will see an increase in both light and darkness. Each will be more pronounced. The light will shine brightly and the darkness will become more dense. I also sense there will be something serious occurring in the United States this next year, but we are to guard our hearts against fear. He is with us and is increasing the territory under our feet.

Just keep walking forward in both alignment and authority; alignment with Heaven and with each other. The increased authority will flow out of increased relationship. Walk in faith. Explore faith. Let faith increase.

I close with this word from Romans 1:17, “The just shall live by faith!”

This is a season of rising in faith, which means there will also be things in our lives that cause our faith to grow. I can see you standing taller from here!

In aerial warfare, air supremacy is the highest level of dominance when one side holds complete control of the skies. God has given us this domination over the works of the darkness in the earth. Decree the Kingdom of Heaven into the nations! Drop spiritual “bombs” that defeat the works of darkness on earth.

Britain – Britain has been in negotiations to separate from the European Union in a movement called Brexit. There is much debate and disagreement surrounding a plan proposed by the Prime Minister.

Zimbabwe – The economic agony of Zimbabwe is extreme causing much suffering and violent protest. This has been a very long struggle for the people of the nation.

USA – There is crisis concerning the southern border of the USA. This involves immigration policies, caravans of people approaching the border to attempt to enter the US, drug and weapons smuggling, conflict between political parties, government shut-down, human suffering, justice – so many issues intertwined in the chaos.

I urge you, first of all, to pray for all people. Ask God to help them; intercede on their behalf, and give thanks for them. Pray this way for kings and all who are in authority so that we can live peaceful and quiet lives marked by godliness and dignity. 1 Timothy 2:1-2

Pray for police and law enforcement in your community: