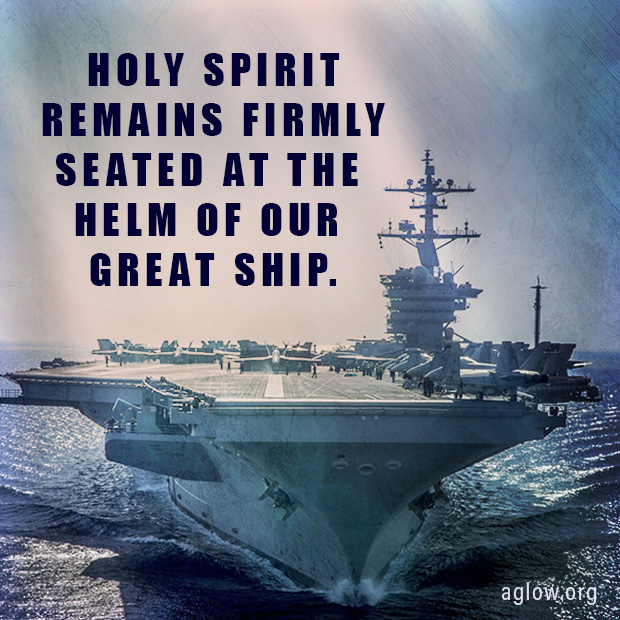 This is an excerpt from Jane’s blog. For the complete blog, go to Propel the Kingdom Forward:

Aglow will drive forward and onward…by Holy Spirit power…that moves us toward the future…where God’s will is fulfilled!” [quote from Carol Martin, Aglow Alaska].

Don’t you love the breakdown of the phrase ‘Propel the Kingdom Forward’? Aglow will drive forward and onward by the power of the Holy Spirit toward the future where God’s will is fulfilled as we go! Spirit born, Spirit-led and that did not stop at the end of the first 50 years. Holy Spirit remains firmly seated at the helm of our great ship! He is leading us on in strength and in power and signs and wonders will follow.

What have you been discovering? Have you experienced the power and authority that comes through your declarations as you speak out the prophetic words and scriptures the Lord has given to Aglow? He said that we have decisive voices that release healing and power.

I want to encourage you between now and the end of the year to stay engaged with the messages from the 2017 conference and to see what you and your team will discover for your nation, your state, your community, and for yourself, personally. This is big. This is REALLY BIG!

God Has Given You Air Supremacy! God Moves Through Asia This Year!

Go to the links for each nation for more details for prayer.  [link each nation to its aglowglobalprayer page]

Chuck Pierce brought this word during his message at our Aglow Jubilee Conference in Richmond:

Crush Chaos - The God of peace will crush Satan under your feet. Romans 16:20

Take Mountains - Declare that the Kingdom of Heaven! Give me this mountain! Joshua 14:12

Give us Africa for Your Kingdom, Lord!

Lord, we crush weariness and frustration in these leaders.  We declare that You are giving them their nations – not by might, not by power, but by Your Spirit.  We proclaim a refreshing in Your Presence that brings rest, fresh vision and renewed determination to propel the Kingdom forward. We declare there is no lack in Africa – no lack of leaders, no lack of vision, no lack of provision.

Lord, we declare that You alone are God in South Africa. We crush the confusion and the injustice over land issues in this nation. We join with Christians in South Africa who carry the destiny of the nation to declare Your righteous rule over the land of this nation.

Lord, we declare peace in Nigeria. Crush the violent spirit that resists peace, brings chaos and causes such destruction in this nation. Let Your Presence arise among Your people in Nigeria with transforming power – power that crushes the works of darkness and draws people into the fullness of salvation through Your Name.  We declare Nigeria is Yours. Lord! Establish Your Kingdom and demonstrate Your goodness throughout the nation.  Strengthen and encourage our Aglow brothers and sisters in Nigeria. Protect them. Encourage them. Show them Your glory!

Declare our God of all peace crushes the chaos. Declare order in the government and protection for the people. We stand with the Christians in Zimbabwe who carry the destiny of the nation to declare the healing of their land. Lord, You said, “A bruised reed He will not break, And smoking flax He will not quench, Till He sends forth justice to victory.” (Matthew 12:20)

Declare that the peace of God crushes this chaos. Lord, protect the citizens of Israel, and show Yourself mighty on their behalf. Expose the perpetrators of violence and stop their plans before they are carried out.

Lord, encourage and strengthen Messianic Believers in Israel. We declare an abundant of spiritual harvest through the ministries You have raised up in the land. We declare an alignment of the household of faith in the earth today that propels Your Kingdom forward and fulfills Your plans. Crush anti-Semitism, and reveal the Majesty of the God of Israel throughout the earth.

Social media brings overwhelming challenges to parents and children today. Statistics say there are 75,000 sexual predators online (according to the FBI) using gaming direct messaging to get to kids. With this, suicide and depression rates have gone up 200% in girls age 10-15.

We are praying for Aglow to be affiliated in every nation of the world.  We are very close to reaching that goal.  Let’s continue to move forward together, a company of champions and global leaders of significance, to see Every nation touched, every heart changed.