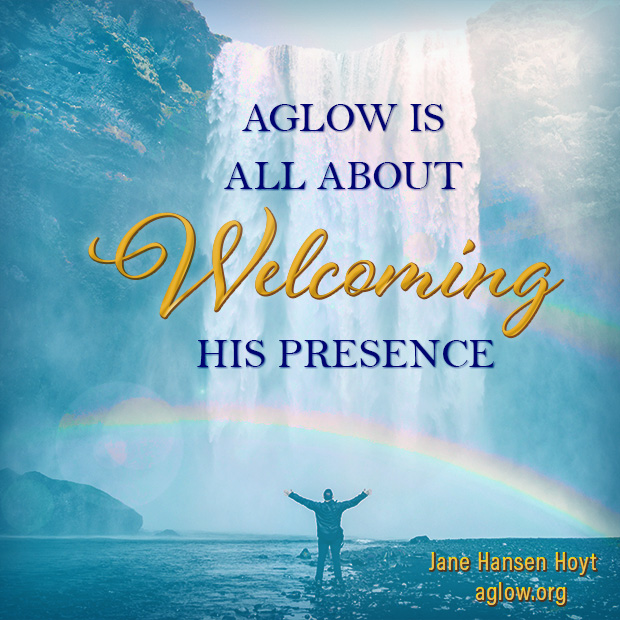 Father, We Want Your Presence in Aglow!

This is an excerpt from Jane’s recent letter. For more, go to visit To See His Glory

We Have Been Given a Scepter

At the Aglow Jubilee conference, Jane was presented with a scepter as a symbol of the favor, authority and Kingdom anointing upon Aglow International. We have walked in the favor of the Lord as He has extended His scepter towards us to release His goodness.

Now, God has given us a scepter, a scepter we can hold and use as a demonstration of His Kingdom authority in the earth. Upon receiving the scepter, Jane said, “I am going to use the end of this today to prophetically break, break, break any barrier over your life personally, over your lives as leaders, over this ministry.”

God Has Given You Air Supremacy!

Go to the links for each nation for more details for prayer.

Crush the chaos that comes against a younger generation. Declare that they are planted firmly on the mountain of God’s Presence.

Turn Back the Battle at the Gate of our Schools

There is a rapid increase in suicide among young people. Crush the hopelessness that overwhelms them and release hope – hope in Christ that gives eternal purpose.

We are praying for Aglow to be affiliated in every nation of the world. We are very close to reaching that goal. Let’s continue to move forward together, a company of champions and global leaders of significance, to see Every nation touched, every heart changed.
This month pray especially for: Guadeloupe, Guam, Iran, Iraq, Jordan