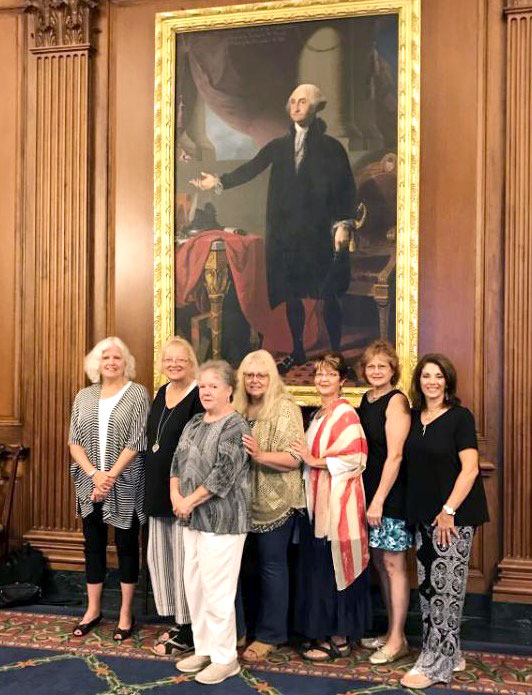 In early August, a team of seven from the Northeast Region including Debra Moorhead, Diane Caliendo, Donna Rhodes, Lanette Beatty, Cathy Caylor, Lauralie Wong, and Elaine Santo traveled to Washington, D.C. for a prayer journey. Below is a synopsis written by one of the team members.

August 11: Early in the morning we drove around the Embassies, prayed and worshipped as we traveled. Later we drove to the Key Bridge where we declared Water Supremacy and commanded all contamination to be gone. We declared the Swamp would be drained and that the Holy Spirit would breathe the breath of life into all the dry bones. Once on the bridge, Cathy blew the shofar in all directions and we declared that God’s Whirlwind to circulate the area.

After that we went to David’s Tent for church service led by a local church. The young people led the service in worship and gave a message. The call for salvation was given and a young man two rows in front of us answered the call and was ministered to. We met and prayed with one of the leaders and he shared his vision of having people praying 24/7 and for divine connections. We declared the wealth of the wicked would be transferred to the house of the righteous.

Next we went to the Longworth Building walking the halls and praying silently in the Spirit. In the afternoon we met with someone from The Center for Security Policy. We were there for 2 1/2 hours as she shared a PowerPoint of “Borders Work” and emailed it to us afterward. She gave such wisdom about Israel and all that is happening.

August 13: In the morning we met for prayer time with influential leaders praying for our young people, for military leaders and some men as they begin new Aglow Men of Issachar groups. Elaine prayed for teachers and students that they will know their identity. We prayed for prodigals and some of our children.

In the afternoon we met with a group involved in Christian outreach to top-level government officials in D.C. They meet and pray with all the justices and staff, and even conduct the only live nativity on Capitol Hill. In the fall, they meet and greet 200 staffers to draw millennials in.
Later in the afternoon we met with another ministry and received words from the Lord for them.

Conclusion: That evening we returned to our hotel, and as usual gathered together in our room for prayer. We had an awesome time of ministry with each other. As powerful as our ministry throughout D.C, was, I believe our prayer times at night were so significant to each of us. It prepared us for each day of ministry. We ministered to our UBER drivers, waitresses, and anyone one else that the Lord showed us. We prayed and declared and decreed scripture everywhere we went.