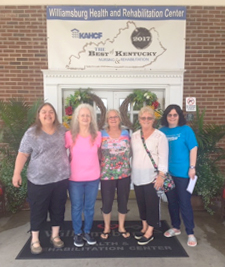 When the Williamsburg, KY Lighthouse noticed that people were not coming to their monthly meetings, they decided to do something different and take the meeting out into the community.

One of the first places they went was a local rehab center for women. Taking the GameChangers personal development course with them, they found that many of the women responded as they learned about their identity being founded in Christ, not their behaviors. This has proven to be life changing for those who heard the messages.

Next, the team, led by Karen Hamblin, went to an Assisted Living facility. They targeted those who cannot or will not leave their rooms and especially those who have had no visitors. Building relationships, they spend time in conversation and ask permission before praying.

Williamsburg is located in eastern Kentucky and has continued to have economic downturns as coal mines close, causing loss of jobs and income. The Aglow team felt lead to do an outreach in the community offering free hot dogs and other food items. The team was blessed as they contacted several local churches and businesses to solicit support. One church donated Bibles, some churches made cash donations, a funeral home set up tents free of charge, and another church gave the use of their parking lot and grill. A grocery store donated bottled water and gave a discount on the hot dogs. Another donated buns.

The Williamsburg team was blessed as they went throughout the neighborhood inviting families to come for the free food. Many received a Bible and prayer.

The team has gone on prayer drives in the town, as well as, prayed with the Mayor. The team plans to do another outreach this winter inside a local community center.

Aglow Lighthouses are a gift of God to the community. How is your group releasing His Goodness into your town?