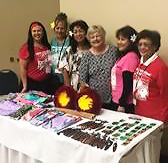 Recently, the Southwest Coastal Region, Carolyn Suty, Regional Director, held a regional event for all those in California and Hawaii. Jane Hansen Hoyt was the keynote speaker.

There were many other firsts that took place, too. For the first time, all the Hawaiian Area Team was able to attend the regional event. All of those on the Prison Ministry Area Team were able to attend, too.

There were times for repentance and reconciliation between people groups. God moved with sweetness and Grace as hearts were touched in profound ways bringing healing and a sense of truly belonging to the family of God.

On Friday evening, Jane and Linda Jones, Executive Director of the US Field, worked together in such a relational way that brought both to tears as Jane shared her testimony. Hearing Jane’s God journey was eye opening to many as she shared her heart.

On Saturday Jane called us all to a higher place as end time apostolic, prophetic intercessors. Knowing that we have been called as such a time as this, what we do, both individually and corporately makes a powerful difference in our world and the lives of those we love. She encouraged us to take advantage of the position God has given us in warfare with air supremacy.

Air supremacy is a position in war. We are in a war. It is a position in war where one side holds complete control of warfare and air power over opposing forces. What are the things that come to oppose you? Maybe your health, maybe other areas of your life, relationships, finance, thought patterns? God is saying, “Do not give in to that stuff.” He has given us air supremacy for our position in the war that we are living in. We hold complete control of that air warfare and we hold air power over our opposing force and enemy. It is a degree of air superiority that is so complete, the opposing air force is incapable of effective interference.

This is not a time to go about business as usual. This is a call to awaken to what God is doing in this hour. Be assured that His plans and purposes cannot be thwarted! Two thousand years ago Jesus urged His disciples to be aware of the time and stay awake and watch with Him.

Jane reminded us of the challenges we face in our state, nation, and the world and to stand strong as we walk towards the return of Christ.

Another powerful aspect of the rally was a creative, interactive evangelism workshop that Janet Mangum, Transformation Director for Aglow, led on Saturday. Hearing practical ways to reach out in friendship evangelism was made doable for all.