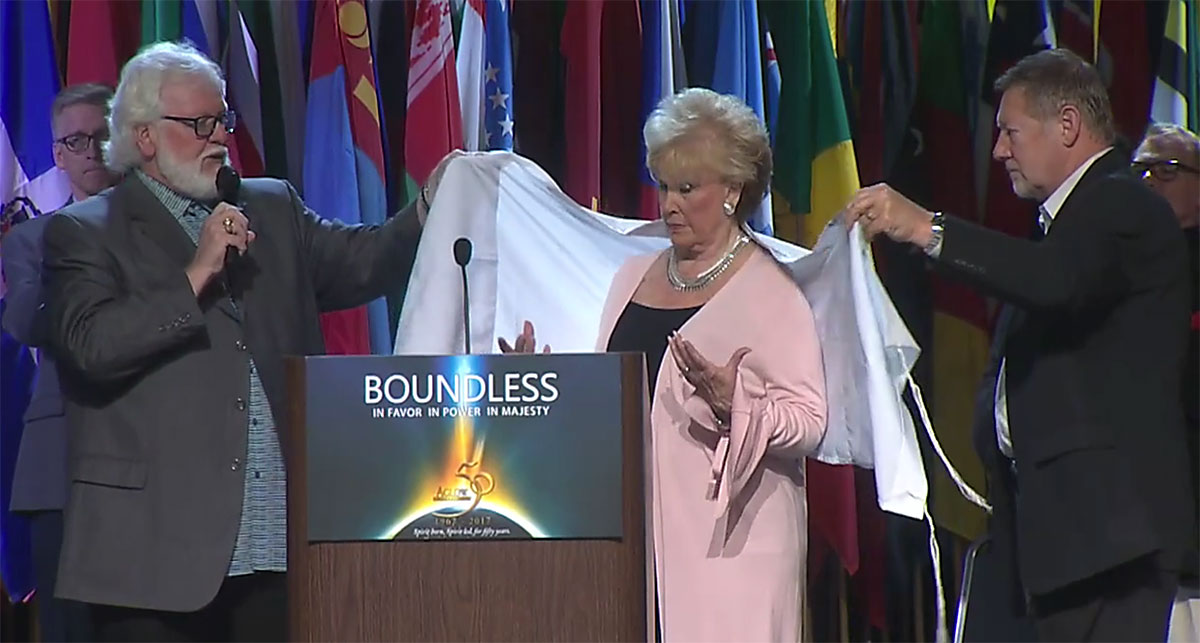 I have not been the same since our 50th year celebration in Richmond Virginia. I feel a fresh fire and an expectation in my spirit that comes when there has been an overshadowing of the Holy Spirit.

My thoughts have often gone towards all that Mary had to "consider" following the words of the angel that she would conceive and bring forth Jesus in the coming days, as The Holy Spirit would overshadow her.

Dutch Sheets said, "There is an amazing weight of the Holy Spirit on this gathering. It is more than just an anniversary. It is a new mantling, a recommissioning. This is your breakthrough portal year." He went on to say, "New doors are about to open to this ministry. What has been done thus far, which has been good, is small fruit compared to what God is going to do."

Following the Global Conference, Tony and I flew to Great Britain to attend their National Conference. It was a powerful time! The newness of the day was so evident in the atmosphere -- the mantel, the scepter, the recommissioning, all working together to release His Glory in the earth.

Expect this to happen in your events and meetings as you move into 2018. What was poured out at our Global event will move throughout Aglow.

As Graham Cooke said when he stood to speak Sunday morning, "Prophets train all their life for moments like this." I would echo his sentiment by saying, "And those of us receiving that prophetic overshadowing of Holy Spirit, wait all our lives for a moment like this weekend, too."

If you were there, you know that what unfolded before us was incredibly huge, powerful beyond words. To be publicly displayed with the seal of His approval before principalities, powers, and rulers of wickedness, and the unified, apostolic army of Aglow International has caused me to be in awe of His Majesty daily. I hope you will purchase the DVDs or CDs if you were not able to attend. You will be grateful that you did. Visit aglowjubilee.com for more information.

The Parade of Flags and Worship

His Majesty was displayed through powerful times of worship. Paul Wilbur joined us for a night of worship and Chuck Pierce said that Thursday night's worship was "a wonderful demonstration of what Heaven looks like in sound."

As I watched Paul after returning home, I heard things that I hadn't noticed that night. Paul was telling us that he was sent out by Asher Intrater from Jerusalem as a prophetic voice. As I listened to him, I knew that his declarations were changing the atmosphere over Israel and aligning them, as well as us, to step fully into the identity prepared for us from the beginning of time. We don't simply stand with Israel, we stand as Israel. Our commitment is an all in commitment.

And to have Ruth Collingridge with us, truly was like having Heaven on earth each time her fingers danced across the keys of the piano. We were overshadowed by His Presence from the beginning until the final amen.

I would like to share a few of the profound, identifying statements that were made by the speakers over Aglow.

As you can see by the above statements, it is easy to see why our time in Richmond left us with a sense of wonder and amazement which remains until today. To get a peek into what happened, watch the short 3 minute video I've included on this page.

I cannot stress enough how imperative it is that we are all on the same page. It is not business as usual. You should expect to hear from me frequently as we move forward in this new place. God is watching our response to all that He sent His messages to impart. He trusts us. He has given us the whole world as our field.

We were cautioned to let go of the familiar so that we can step into the new -- we went through a portal at conference, don't allow the familiar to pull you back through. Things are not the same, change is on the horizon -- it is here among us. Let us be bold and courageous as we run into our future. He is watching us.

I look forward to speaking to you again in the near future as I roll out steps we will take together around the world to see all He has spoken to us unfold.