The Significance of a Name 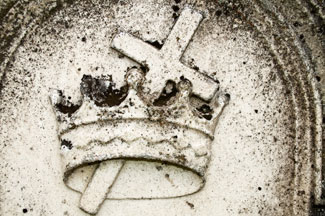 He is the Lord of Lords & King of KingsThere is much significance in a name.  It is a point of identification and is a distinctive designation.  The ability to refer to and identity a subject is integral to our way of communicating with one another.  You greet people, by giving your name.  Names also have power.  Your signature on any legal document carries an authority and, in essence, states that you are knowledgeable of, and responsible for that which you are signing your name to.

A NAME ABOVE ALL NAMES

There is a name that is far greater than any name in history.  It is the name that is above all names.  There are not enough nouns’ and adjectives in any language of the world to describe the majestic, all powerful name of the Lord Jesus Christ.

God has highly exalted Him, and given Him a name which is above every name; That at the name of Jesus every knee should bow, of things in heaven, and things in earth, and things under the earth; And that every tongues should confess that Jesus Christ is Lord, to the glory of God the Father.  Phil. 2:9

It is the name that rules all heaven, earth and under the earth.  His name rules in this world and in the world to come.  His name identifies Him.  His name has power and there is authority in His name.

In Genesis, He is the Seed of the woman.

In Exodus, He is the Passover Lamb.

In Leviticus, He is the Eternal High Priest.

In Numbers, He is the Cloud by day and Pillar of Fire by Night.

In Deuteronomy, He is the Prophet Like Unto Moses.

In Joshua, He is the Captain of our Salvation.

In Judges, He is the Lawgiver.

In Ruth, He is the Kinsman Redeemer.

In I & !! Samuel, He is the Incomparable Prophet.

In I & II Chronicles, He is the Great Monarch.

In Ezra, He is the Faithful Scribe.

In Hezekiah, He is the Great Edifier.

In Esther, He is our Escape from Death.

In Job, He is our Hope and Resurrection.

In Psalms, He is our Great Shepherd.

In Proverbs, He is the Eternal Wisdom.

In Ecclesiastes, He is the Eternal Life.

In Song of Solomon, He is the Lover of our Souls.

In Isaiah, He is the Prince of Peace.

In Jeremiah, He is the Righteous Branch.

In Lamentations, He is the Prophet Who Weeps for Us.

In Ezekiel, He is the God of Four Faces.

In Daniel, He is the Fourth Man in the Fiery Furnace.

In Hosea, He is the Faithful Husband.

In Joel, He is the Baptizer in the Holy Ghost.

In Amos, He is the Burden bearer.

In Obadiah, He is the Mighty to Save.

In Jonah, He is the Great Missionary.

In Micah, He is the Messenger with Beautiful Feet.

In Nahum, He is the Avenger of God’s Elect.

In Habakkuk, He is the Stirring Evangelist.

In Zephaniah, He is the Burning bush.

In Haggai, He is the Restorer of God’s inheritance.

In Malachi, He is the Son of Righteousness.

In Matthew, He is the Messiah.

In Mark, He is the Miracle Worker.

In Luke, He is the Son of Man.

In John, He is the Son of God.

In Romans, He is the Justifier.

In I & II Corinthians, He is the Gifts and Fruit of the Spirit.

In Galatians, He is the Redeemer from the Curse of the Law.

In Ephesians, He is the Christ of Eternal Riches.

In Philippians, He is the Supplier of Every Need.

In Colossians, He is the Fullness of the Godhead.

In I & II Thessalonians, He is the Soon Coming Kind.

In I & II Timothy, He is the Mediator Between God and Man.

In Titus, He is the Faithful Pastor.

In Philemon, He is the Friend Closer than a Brother.

In Hebrews, He is the Blood of Covenant.

In James, He is the Mighty Physician.

In I & II Peter, He is the Great Shepherd.

In Revelation, He is the King of Kings and Lord of Lords.

God raised Him from death and set Him on a throne in deep heaven, in charge of running the universe, everything from galaxies to governments, no name and no power exempt from his rule.  And not just for the time being, but forever.  He is in charge of it all, has the final word on everything.  Ephesians 1:20-21  The Message

* Taken from a message by Dr. Bernhard Johnson, an Assemblies of God missionary to Brazil;  preached at Yoido Full Gospel Church in 1983.

Repos de Nos Ennemis
GOD HAS A WAY THROUGH EVERYTHING

Thank you Jane for sharing this wonderful truth. It ministers to me at a deep level.

I am celebrating my 34th year of accepting Christ into my life. I am forever grateful to God the Father, Jesus my Redeemer and the Holy Spirit for pursuing me and revealing my need to be born again. I am a new creation.

Carla
This comment was minimized by the moderator on the site

How wonderful to see the prophets and writers of each book revealing the unique and wonderful-ness of our Yeshua!!!!

I teach a faith and healing seminar at my church on each 4 th Saturday. Just last month the Holy Spirit led me to teach of the Name of Jesus. You know that use the Name of Jesus as just a name that we close our prayers. It to many has become...

I teach a faith and healing seminar at my church on each 4 th Saturday. Just last month the Holy Spirit led me to teach of the Name of Jesus. You know that use the Name of Jesus as just a name that we close our prayers. It to many has become just a cliche. But His Name is so powerful that there is no other name by which we are saved. The Name of Jesus is our guarantee that our prayers will be answered for Jesus said that whatever you ask the Father in My Name, He will do it. It is the Name that we cast out demons and they have to obey. His Name is been to given to above every name that is named and therefore disease has to bow to that Name. Signs and wonders occur when we use the Name.
We are baptised in that Name. Our sins are buried forever in that Name. Thank you for this timely message about the precious Name of Jesus. We as the body of Christ must remember that we have a great inheritance and that is the gift of the Name of Jesus. It is not just Name that we use in ending a prayer but in that Name is power to do the extraordinary and the miraculous!

Ruth R, Marquez
This comment was minimized by the moderator on the site

Precious Name of Jesus!!Thanks for sharing!

Deborah
This comment was minimized by the moderator on the site

Very timely and much needed for remembrance and meditation during these last days and times. Thank you for your vision and leadership.

Good article. We should consider what we are showing the world about us and our own name when we do some things. Our own name is unique too! It identifies us and what we stand for. For me I want my name to stand for Christ. I want everyone...

Good article. We should consider what we are showing the world about us and our own name when we do some things. Our own name is unique too! It identifies us and what we stand for. For me I want my name to stand for Christ. I want everyone to know that I am a Christian and my actions to show it without question!

P:raise the name of Jesus.

Dorliss Blalack
There are no comments posted here yet
Load More