The Lord has had me on a journey of sorts for the past year with the number 17. At first I thought it was a personal word for me, but as I pursued it, I felt it was beyond that. Where the process led me, was to insights into Daniel and Ezekiel, with particular reference to what is happening in our nation at this time. The last portion is a declaration over our nation.

It began with a dream in 2012 in which I was looking for a phone booth to make a call that cost 17 cents. I was about to take a quarter from my coin purse, but realized I had exactly 17 cents. The dream ended and I woke up with the number 17 very prominent. I was aware it was a prophetic dream, but did not have the interpretation at that time. 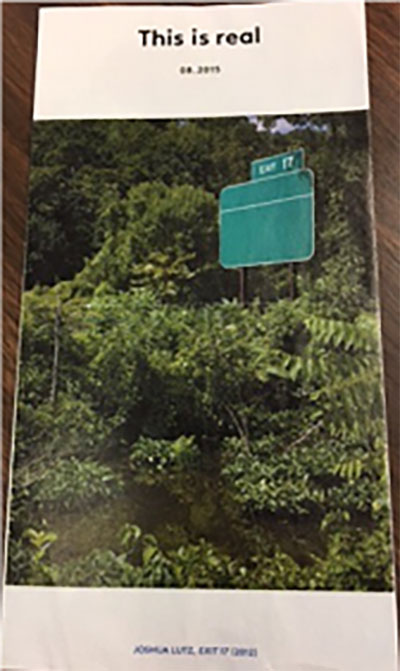 This year, the number 17 began coming up frequently, and because of the dream, my spirit was quickened to it. The first, in January, was a word on the Elijah List concerning land, but what caught my eye was a graphic of the number 17 that was part of the post. Next, after teaching a prophetic class at my church, I was going through magazine pictures that I use in a prophetic exercise for the students, and the picture on the right fell out of my file.

Since there were over 100 pictures in the file, I hadn't remembered this one. I was struck by the fact that it was a freeway sign, “Exit 17,” but it had no destination and was nowhere near a road. The heading struck me as well: “This is real.” Then just last week, Bill Yount had a post on the Elijah List with a picture of an Exit sign. The word was titled, “Watch for Exit Signs to Light Up in this Season.” Other “17”s came up, throughout the year and I began sensing it was related to 2017. That sent me on a path to pursue the number 17.

As I began researching, I found that the number 17 is much more significant in the Bible than I would have thought. It means: Victory, God’s elect, Transition, Promotion. Biblically, 17 is the sum of 2 perfect numbers, 7 and 10 (the others being 3 and 12). One interesting aspect is that the first 17 integers add up to the number 153 (1+2+3+4…..+17=153). This is the number of fish caught in John 21. Much significance to that, but suffice it to say, it deals with the fullness of time and the harvest.

There are many references to the number 17 in the Bible, many of which have to do with victory. Here are a few.

In the Old Testament:

In the New Testament:

Other non-Biblical facts about the number 17:

And one more very significant one…

Daniel 5 and the handwriting on the wall

Reading in Daniel, I sensed the Lord giving me an insight related to our country. In Daniel 5, King Belshazzar is holding a feast for 1,000 of his officials, all the while Cyrus is besieging Babylon. He calls for the “holy vessels” stolen from the Temple by his grandfather, Nebuchadnezzar, to be brought in so he and his friends can drink wine from them, all the while worshipping the gods of “silver, gold, bronze, iron, wood, and stone.”

“Suddenly, they saw the fingers of a human hand writing on the plaster wall of the king’s palace, near the lampstand.” (Dan 5:5). The astrologers, soothsayers, and wise men of Babylon could not read or interpret the handwriting.

Daniel is called in to interpret and he begins by reminding Belshazzar of his grandfather’s sad end. Because Nebuchadnezzar had abused the power and glory God had given him and became lifted up in pride, he was “brought down from his throne, stripped of his glory, had the mind of a wild animal, ate grass, etc...Until he learned that the Most High God rules over the kingdoms of the world and appoints anyone he desires to rule over them.”

“You knew all this, Belshazzar, and still you didn’t humble yourself, but defied the Lord of heaven by bringing these cups here and worshiping gods that ‘neither see, nor hear, nor know anything at all’…"(Dan 5:22-24) .

Then Daniel interprets the handwriting:

Here is the insight I believe the Lord was giving me:

Insight on the handwriting:

Lord, may we declare that the liberal “kingdom” will be destroyed or dissolved in this election.

September 17th also happens to be Constitution Day. On September 17, 1787, the Founding Fathers gathered to sign the document they had created...our Constitution.

Ezekiel 10 details the glory of the Lord leaving the Temple in stages. I thought of how the glory of America has been leaving, or declining, in stages – with each succeeding decade.

As I was reading how the glory returned to the Temple from the East, suddenly, I “heard” in my spirit, “Make America great again!”

Bring back the glory to America that she had in the beginning…and bring it from the EAST! Washington, DC. I had not been thinking about candidates or the election or anything political at the time.

My spirit was deeply stirred because I sensed the implication of what I was hearing.

All of my research about the number 17, Daniel and Ezekiel, has led me to the conclusion that 2017 will be not only a very significant and pivotal year, but one of amazing victories and major shift in both the natural and spiritual realms.

It will not be just another year with business as usual.

I believe we will see the glory of the Lord, but it may not come in the way we expect. God revealed one aspect of His glory to Ezekiel, and I sense that as we are watchful, prayerful, and expectant, He will reveal His glory in and through people, circumstances, and events.

There is a remnant in our nation that is rising up to stand in the gap, make prophetic declaration, and believe God for a “dissolving of the kingdom” that seeks to destroy our foundations. Lord, bring Your glory back to the United States…to the glory You gave her when she was birthed!

Based on this word from the Lord, I wrote this declaration of faith over the United States:

Father, You speak over and over in Your word about the remnant. You said You wouldn’t destroy Sodom and Gomorrah if there were but 10 righteous. You told Ezekiel to set aside a few strands of his hair to represent the remnant. You have told us when You look at a nation, it is the believers in the nation that carry the destiny of the nation.

Father, awaken Your remnant in THIS nation! Awaken us to the pivotal hour in which we are living and the power You have given us to shift the nation. Strip away the deception that would cause people to be either apathetic about this election, or to stay away because of the choice of candidates. Father put a fire in the hearts of Your people for this nation once again! The fate and the destiny of the United States hangs in the balance.

In this season of Yom Kippur, we repent for the sins of our nation, and they are many, and ask that you would show mercy, which triumphs over judgment. We humble ourselves before you and ask forgiveness for having turned completely away from You and Your truth.

Father, we call for a divine intervention in our nation at this time.

We stand against the forces that would defile the “sacred vessels” of our nation – the Constitution, the Bill of Rights, religious liberty, the right to bear arms - while worshipping the god of political correctness. We say ‘No’ to the spiritual wickedness in high places and stand against the spirit of lawlessness that would attempt to tear down this nation which You raised up to be a light among the nations.

Father, we declare that just as You brought Your glory back into the Temple from the east, so You will do once again for our nation…bring the glory back to America that she had in the beginning…and bring it from the East – Washington DC.

Just as the decree of Haman against the Jews was overturned, Father, we ask that in this election, “the opposite will occur” (Esther 9:1) and You would bring an end to the kingdom of darkness that seeks to destroy this nation.

We decree a season shift in the nation, over the land, over the people. We declare that we will not look to the natural, but will look to you, Jesus, the Author and Finisher of our faith.

Make America great again…not by might, not by power, BUT BY YOUR SPIRIT!